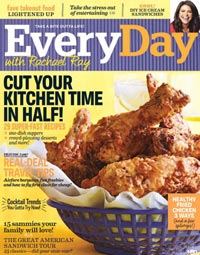 Every Day with Rachael Ray has created two free mini-cookbooks devoted to the art of the grill, "The Summer Grilling Hot List" and "Grill-Out Faves" -- marking the first time the magazine has ever made recipes available this way. "The Summer Grilling Hot List" includes recipes for dishes like salmon steaks with grilled pineapple and corn, stuffed pork chops and chicken, plum and red onion kebabs.

Users can download the "Summer Grilling Hot List" at the site’s Facebook page. "Grill-Out Faves" features popular recipes from the magazine, including Sweet-Tart Ribs & Potato-Zucchini Boats and Ginger-Peach Ice Cream in Grilled Peach Cups, and is downloadable at the magazine’s Web site.

Every Day With Rachael Ray was sold to Meredith Corp. by the Reader’s Digest Association in October of last year, including the signing of a 10-year licensing agreement with Watch Entertainment Inc., the company established by the celebrity TV chef to manage all aspects of her media and brand presence. RDA sold the magazine because its ability to expand the brand was limited by its agreement with Rachael Ray herself, who retains control of her media brand and presence in areas outside the print magazine.

Also this week, Meredith’s EatingWell announced the launch of a new mobile app, “Recipes 2 Go,” sponsored by Pfizer’s Lipitor, which is used for cholesterol control. The free app, which is available on iPhone, iPod Touch, iPad and Android phones and tablets, offers resources to help consumers manage their heart health. This includes 200 healthy recipes for appetizers, entrees, side dishes, snacks and desserts. The “Recipes 2 Go” app extends the newly launched Lipitor For You and Smart Living site, www.lipitorsmartliving.com, which features over 500 additional healthy recipes from EatingWell.

The magazine introduces readers to digital AV media preservation, showcasing current issues, new developments and future perspectives in their domain. AV Insider is published by The PrestoCentre Foundation, an Amsterdam-based nonprofit whose mission is supporting AV professionals in keeping their archival collections available for the long term. Marius Snyders is AV Insider editor in chief.

Amanda Ross has been named fashion director for American Express Publishing’s Departures, which is published for Amex Platinum Card and Centurion members. Ross has been a contributor to Departures since her Uptown Girl column debuted in the September 2011 issue. She will be responsible for overseeing all fashion and jewelry coverage. Ross previously served as market director of Harper’s Bazaar and global fashion director at W Hotels. She also helped launch C magazine in Los Angeles.

Romer To Associate Publisher, The Atlantic

Hayley Romer has been named associate publisher of The Atlantic, where she will help publisher Jay Lauf lead advertising efforts across all the magazine’s platforms. Prior to joining The Atlantic, Romer spent five years at the Condé Nast Media Group, most recently as executive director of corporate sales. Before joining Condé Nast in 2007, Romer managed the luxury account list at Forbes Media. She began her career in publishing at American Heritage.