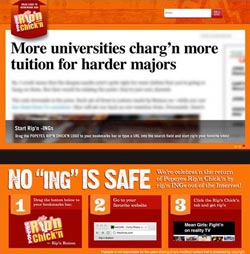 Popeyes Louisiana Kitchen is celebrating the return of its Rip’n Chick’n by releasing a bookmark plug-in for Internet browsers on Monday that will replace the “-ing” on any site with an ’n. The plug-in, developed by Popeyes’ digital agency Campbell Mithun, allows users to alter their Web browsing experience in an entertaining way.

Dick Lynch, chief global brand officer at Popeyes, stated that the plug-in allows customers to “experience this product in a very memorable way.”

Users go to the landing page to get the plug-in. From there, they can drag a button onto their bookmark bar -- for free -- and begin browsing Web sites normally. If the user wants to “rip” the site they are on, all they have to do is press the button on their bookmark bar, and every “-ing” on their current page will be replaced with an ’n.

“We were inspired by how Popeyes named the product,” said Rachael Marret, president of Campbell Mithun. “I haven’t seen [a plug-in like this] anywhere else.”

“Rip’n Chick’n” is a singular name for a product, but it’s nothing compared to the potential results the plug-in could turn up.

Popeyes lovers, who are highly loyal to the brand, can easily share their favorite rip’d up Web content on social media sites like Facebook and Twitter. There will also be a “best of” section created by Campbell Mithun -- a central hub for the funniest rip’d up Web content found by users.

Marret said that ads on Web pages will not be affected by the plug-in, which was specifically designed to leave ads alone, altering only the content of the actual page. “It’s a really interesting experience, and I think people are going to have a lot of fun with it."