An E-Book Comes Screaming Across The Sky: Even Pynchon Is Mobile Now 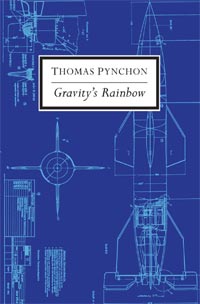 “Should I read 'Gravity’s Rainbow'?” my wife asks every once in a while.

“No, never. Don’t go near it,” I advise. If she reads it, I will be called upon to explain it. As one of the original and unabashed fan boys of the notoriously difficult novelist I am plagued by friends asking me to annotate their experiences with the author of "Gravity’s Rainbow," "V," and more recently "Against the Day" and "Mason & Dixon." Myself, I gave up chasing literary allusions long ago. I am in it for the humor now. Whatever you say about the obscurantism, poor characterization and anarchic plotting of Thomas Pynchon, the man can be one of the funniest prose writers this side of P.G. Wodehouse.

Now I can read him on my Kindle, Nook and iPad. As reported by The New York Times and others as the caving in by the last of the great literary holdouts from digitization, as of this morning, his full oeuvre was available in e-book form for between $10 and $13 a volume. Penguin, the owner of the digital rights has released the “Complete Collection.”

It is a bit of a milestone, but only insofar as reporters mistake the author’s aversion to media as a general dislike of media and modernity. The famously camera-shy chronicler of real and imagined conspiracies and radical uprisings has gotten an undeserved reputation as a recluse and a luddite. He is neither, really. Pynchon hides in plain sight in uptown Manhattan where he has lived for years. And he was filling novels with piles of post-modern film, radio, pulp fiction, mad music and TV references long before it became fashionable. He even appeared on two episodes of "The Simpsons."

Whatever Pynchon’s reasons for resisting the tug of digital platforms for his work, it is good to have him here now. It is also a good moment to recall that the knee-jerk resistance to digital media is itself quaint, often superficially nostalgic and wrongheaded. Those who covet physical print might want to remember that the novel itself was made possible by technological innovations in print, and for its first couple hundred years of life it was widely regarded as a sub-literate form. Only silly middle-class girls were said to read  them in the 18th century. And now we bemoan the decline of print because we think with it goes some grander and civilized tactile experience that somehow is attached to deeper thought. Oh, please.

If it weren’t for e-books I wouldn’t be a third through rereading the full Dickens library. My goal is to do it in a year with an hour of reading my iPad versions as the device sits on my stair-climber machine. I tried doing this for years with physical books. In fact, one of my early author projects was a year of rereading Pynchon in order during my morning exercise ritual. Now I have a shelf of his books with sweat-wrinkled pages and broken spines from managing these monsters on an exercise machine.

But to his and his publicist’s credit, they advertised the digitization of Pynchon in a wonderfully crafty way. The obligatory book video is mostly just black-and-white words literally screaming into view. So good for him. Maybe this lets us get past hand-wringing over the decline of the book. If Amazon, Barnes & Noble and Apple would make a bit more of an event out of our greatest living writer coming to e-books, he might get a wider audience. The inevitable first focus on new technology is the purported loss of older treasured experiences. Eventually it becomes clear that the new platforms open up a range of newer ones.

If book publishers were a bit smarter, they might do much more than just “release” backlists to digital platforms. They might see that devices give them a new opportunity to match older talents and voices with newer audiences and it gives them richer tools for making their pitch.

Maybe the old master bad-joke writer Pynchon himself could lend a hand. "Hey Skeezix - is that a V-2 rocket in your pocket or are you just reading 'Gravity's Rainbow' on your iPhone?"