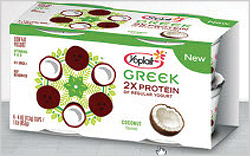 Late to the Greek yogurt phenomenon that’s stealing share from its cash-cow Yoplait brand, General Mills plans to launch 40 new yogurt products in the first half of its new fiscal year, which started May 29.

Some of the launches will start shipping next month, including 100-calorie Yoplait Greek yogurt cups (endorsed by Weight Watchers), and Yoplait Fruplait, which claims to have twice as much fruit mixed as the leading brand.

Yogurt accounted for 15% of General Mills’ $10.2 billion U.S. retail division in 2011. In its financials report on June 27, the company confirmed that it will be employing a full-press U.S. marketing effort (including TV and other ads, coupons and promotions to generate trials of its new and existing yogurt products) during its current fiscal, although its global marketing budget as a percentage of sales will be about stable with fiscal 2012. (The company spent $914 million worldwide on media in fiscal 2012.)

Starting in July, General Mills will also take over U.S. sales of Liberté Mediterranée, a rich, creamy yogurt popular in Canada that currently has about $14 million in sales in the U.S. Liberté is owned by Yoplait SAS, in which General Mills bought a 51% stake last year. General Mills will sell the brand, including its Greek version, under a licensing deal.

General Mills will also expand marketing/distribution of Mountain High throughout the U.S. That yogurt brand, which it acquired last year, has heretofore been sold primarily in the Western U.S.

However, according to various press reports, some analysts believe that General Mills may have missed the window of opportunity on the Greek yogurt phenomenon. The company currently has just a 6% U.S. share of that segment, versus Chobani’s just-over-half market share, followed by Dannon’s 17% share and Fage’s 13% share.

The company’s total worldwide, full-year net sales grew 12%, to $16.7 billion, including seven points of growth contributed by its July 2011 acquisition of the 51% controlling interest in Yoplait SAS and a 50% interest in a related entity that holds the worldwide Yoplait brands.

The company’s diluted EPS was $2.35, and its adjusted diluted EPS (excluding certain items) was $2.56 versus $2.48 a year ago. Significantly higher input costs affected results.

General Mills’ fiscal 2013 forecast of EPS of $2.65 disappointed analysts, according to Reuters.