Bloomberg Businessweek: Yep, You Can Put A Magazine On A Phone 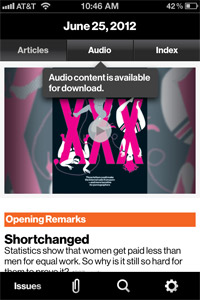 Most magazine publishers have been so obsessed with the tablet in the last two years that their smartphone app programs seemed to have been pushed to the margins. The lure of print-like engagement on the iPad was as powerful as chum thrown to starved sharks. The frenzy was impressive, even if it had uneven results.

While some magazines initially brought their full issue contents to iPhone apps in the device’s early days, conventional wisdom held that porting a mag to an iPhone was not the best use of the platform or the print brand.

Bloomberg Businessweek successfully revisits the original model of app-ified magazines by bringing to bear the full curriculum of its mobile learnings. The app extends all of the content of the weekly onto the iPhone but does so in a way that shapes itself beautifully to the medium. A long scroll of headlines tells you how long each piece is from the home screen. You can clip articles for viewing later or even search all of the previous issues in your subscription, even if the older issues have been deleted.

The brilliance of the app comes in the multimedia enhancements, however. All of the audio assets attached to articles, such as Bloomberg radio and podcast recordings of the reporters, are downloadable and playable with each piece. The relevant video from Bloomberg TV can also be streamed, including a video welcome from the editors outlining what is in each issue.

The famously good Bloomberg market charts pop up with the stock ticker attached to every company names, and there is even an index of all companies cited in an article and issue.

For a while Bloomberg Businessweek+ was among the best magazines on the iPad for some of these same features. In some ways they feel more present on the phone because they are less attached to a magazine experience. But what Bloomberg has done very well here is use the magazine as an effective app anchor on its universe of multiplatform content: print, Web, radio, TV. It comes closer than many companies before to glimpsing what a 360-degree media brand feels like as the silos start dissolving.