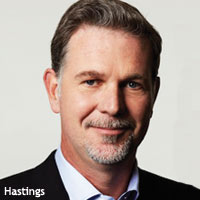 Less than a year ago, Netflix was reeling from a botched rebranding effort, and a clumsy shift in focus from physical to digital video subscriptions.

Seemingly back on track, the company now reports that subscribers streamed over 1 billion hours of movies and TV shows last month.

Netflix CEO Reed Hastings -- who posted the record number on his Facebook page Tuesday -- attributed the success to the company’s ability to secure strong content offerings. For that, Hastings gave much of the credit to Ted Sarandos, Netflix’s chief content officer.

“Congrats to Ted Sarandos, and his amazing content licensing team,” Hastings wrote. “When ‘House of Cards’ and ‘Arrested Development’ debut, we’ll blow these records away.”

Netflix comprised 45% of online movie revenue in 2011 -- up from a mere 1% the year before, according to recent report from HIS iSuppli.

In April, Netflix boasted $870 million in revenue for its fiscal first quarter. The company also reported adding nearly 3 million subscribers to its streaming service -- 1.74 million domestic, and 1.21 million international -- which brought the total number of streaming subscribers to 26 million.

By contrast, Apple’s share reportedly dropped to 32.3% from 60.8%. Overall, the online movie business in the United States more than doubled in 2011, hitting $992 million in revenue. It should double again this year, according to IHS.

However, as demonstrated by a slumping stock price earlier this year, Wall Street doubted whether Netflix could -- as predicted by Hastings himself -- add an additional 7 million customers to its domestic streaming-video service in 2012.

Citing bigger problems, analysts remain skeptical over Netflix’s prospects. Morningstar Analyst Michael Corty on Monday slashed his fair value estimate of Netflix to $55 from $80. In a note, Corty cited Netflix’s international expansion as “the worst decision the company has made.”

Last month, however, Janney Capital analyst Tony Wible, a longtime critic of Netflix, lifted his rating on the company’s shares from Sell to Neutral, citing a recent sell-off and Wall Street estimate cuts.