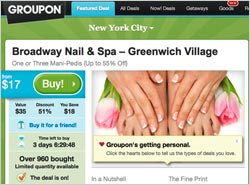 Blame it on poor performance data or short attention spans, but the daily deal space has lost the attention of many in the media and research community. Forrester, for one, recently projected minimal success for such sites.

A new study funded by Rice University, however, portrays a strong sector with no signs slowing down.

"Overall, the results find little or no evidence of deterioration in the performance of daily deal promotions over the past year or as the business operator runs multiple daily deals," according to Utpal Dholakia, a professor of management at Rice University’s Jones Graduate School of Business, and author of the report. "Rather, there is improvement on some metrics."

The study, “How Businesses Fare With Daily Deals As They Gain Experience: A Mutli-Time Period Study of Daily Deal Performance,” examines performance of daily deals using survey data from 641 small- and medium-sized businesses obtained at three time periods: April-May 2011, October 2011, and May 2012.

In contrast to a study published by Dholakia last summer, his latest findings indicate a number of positive signs for the daily deal industry.

For one, the likelihood of enjoying profitable promotions is now largely associated positively with businesses’ experiences.

What's more, the percentage of businesses making money jumped by about 6 percentage points in the May 2012 sample -- from 55.5% (in spring 2011) to 61.5%. Also of note, Dholakia found that daily deals are just as likely to be successful for both businesses that don’t do any marketing and those that spend heavily.

Overall, almost 80% of daily deal patrons are new customers -- even for businesses running their seventh (or higher) daily deal, and businesses continue to see equally stable conversion rates for both repeat purchasing and spending beyond deal value.

As it stands, daily deals appear to be sustainable programs for approximately 30% of businesses, while newer and relatively smaller businesses have even higher sustainability rates of close to 40%.

All things being equal, daily deals appear to be more sustainable for newer and smaller businesses, Dholakia found.