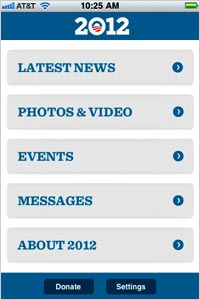 Is Mitt Romney wasting his money on iAd?

A new survey of U.S. smartphone owners commissioned by mobile marketing firm Velti found the presidential race isn’t even close within this population, favoring Obama by 49% to 31% over Romney. The study conducted by Harris Interactive involved an online survey of 2,164 adults, among whom 776 were iPhone or Android phone users.

The lopsided result of the smartphone user survey stands in contrast to the latest national polls, showing Obama with a slight lead. The difference comes down to demographics.

“At the moment, younger folks, more urban folks, and African-Americans and Latinos are disproportionately likely to be smartphone owners. And that seems to fit the Obama demographics a bit better,” said Lee Rainie, director of the Pew Research Center’s Internet & American Life Project. Findings from its February survey on smartphone ownership, for instance, showed 67% of those ages 18-24 have smartphones compared to only 31% of those 55-64.

At the same time, Rainie noted that smartphone owners also are also more likely to be high-income Americans and men -- groups that tend to favor Romney. Still, Obama topped Romney across a number of different demographic segments among smartphone owners in the Velti survey. Among those with household incomes of $75,000 or more, Obama leads 49% to 39%, while among people with a college education or higher, he’s ahead 56% to 35%.

One group where Romney does hold a big advantage is among retirees, by 57% to 34%. The Velti findings come about a month after the Romney campaign revealed it had begun using Apple’s iAd across the iPhone, iPad and iPod touch devices, making him the first candidate to do so. But considering the political “smartphone gap,” should Romney save his money?

“I would say it's the opposite,” said Velti CMO Krishna Subramanian. “Obama is actually doing well in some demographics that are more traditionally Republican voters. Investing in mobile marketing to get a few percent of those folks back in the GOP column could be a very good investment.” At present, neither candidate is advertising directly through Velti, although ads could run through a partner on its Mobclix mobile ad exchange.

The Romney campaign toldThe Wall Street Journal last month it believes the app-like iAds will be more engaging to people, and that it plans to continue experimenting with the mobile ad effort right up to the Republican convention in late August. Its embrace of iAd also indicates a shift from the focus on text messaging in the 2008 election cycle towards display and video ads in mobile this year.

When it comes to smartphones, perhaps the main thing to remember is that nearly half (46%) of American adults now have one, according to Pew, making that a large swath of potential voters no matter how you slice it. “The big point to make, of course, is that the device doesn’t dictate the political inclinations of its owner,” said Rainie. “The demographic traits of the owners are much more likely to shape their political inclinations.”