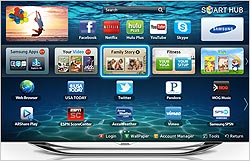 While desired apps for new smart TV come from the most popular online destinations, such as Netflix, YouTube and Facebook, many consumers are still not familiar with the functions of these new TV sets.

Looking at traditional TV brands, the most desired app comes from ESPN, 21% of smart TV owners, and Syfy, at 14%.

Still, there is some confusion over what smart TVs do. Harris says almost three-quarters (73%) of non-smart TV owners indicate that they are not that familiar (39%) or not at all familiar (33%) with smart TV or Internet-connected TV.

Manny Flores, senior vice president of Harris Interactive, stated: "As the TV becomes a more overall entertainment device, it is only a matter of time before we see the mainstream use of additional content apps, such as Facebook, being used on the TV."