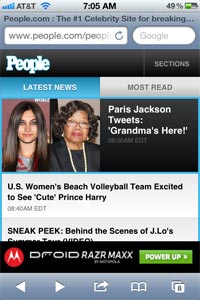 People.com this week launched Time Inc.’s first foray into responsive design. The magazine site has a new HTML5 structure that allows the full site content to flow naturally into smartphone browsers. The company had introduced one of the first tablet-centric versions from a major media company many months ago.

With this new approach to mobile, the brand is acknowledging how important the migration of mobile has become. According to Nielsen Mobile, People gets 4.5 million unique users from mobile devices each month. With a fashion and celeb-heavy site of countless slide shows, People can often top 1 billion monthly page views on the Web.

Some context is important. Overall, the magazine industry has struggled with the Internet. I have covered it since 1996, and at every stage of digital innovation, most magazine brands seemed to lose a march on start-ups that ended up owning content categories you would think some of these brands should have dominated.

At first the daily and then real-time news cycles of the Web were simply anathema to magazine publishing, so each company had to decide when and how much to commit to always-on editorial and publishing operations. In the second wave of the Web in the early 2000s, the apparent collapse of the dot-com bubble sent many publishers into “see-I-told-you-so” mode and retreated from some early investments. The resurgence of the Web caught many print periodicals by surprise -- and especially the new content discovery economy of search and then social.

As a result, magazines traditionally have been playing catch-up, and have to maintain the remaining cash cows of print and protect their subscription content.

Mobile is a bit different. With nearly a billion page views a month, People is among the few magazine brands to really break through the dot-com clutter and dominate its category. While many other celeb sites also generate massive traffic, People has done a good job of protecting its brand reputation as a respected and well-vetted authority in a world of gossip.

The responsive design at m.people.com is quite impressive. It pushed the full site content into the smartphone browser, but the interface is thoroughly navigable. A top-line tab switches between the top stories and the most read. A drop-down menu gives quick access into the guts of the site. Like most responsive designs I have seen, the scroll is interminable. It has a persistent banner ad (for launch sponsor Motorola) as well as persistent top-line navigation visible as you scroll.

I have to say that this technology is still haphazard for me. At time the top and bottom nav and ad bars are rock-solid and work well, but at other times they seem to drag back into the screen as I scroll. I have seen this effect before, and it is an experience-killer for me.

The design is especially interesting in its dual axes. Various key sections allow the user to laterally swipe through additional content. This is a remarkably efficient way to pack a full site into a single screen and let the user drill without the page refreshes that mobile users dread.

It is People’s belief that its users are looking now for the full site content on mobile, although it also has hired a mobile editor to craft some unique mobile experiences as well. It is good to see magazine brands take a lead position here. Meredith’s Parents.com earlier this month also launched a responsive design of its Web site. This is an interesting test of how much of Web activity users want to migrate to their phones.

Personally, I think magazine brands have always had a lot to offer the digital content ecosystem, but often have lagged behind new media startups. Mobile seems a fitting place for magazine content to get a do-over in digital. After all, weren’t magazines the original portable content delivery vehicles?