'The Daily' Lays Off One-Third Of Staff 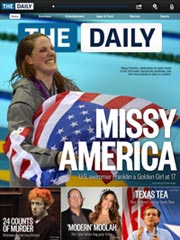 Being a digital-only publication isn’t saving News Corp.’s tablet-inspired newspaper, The Daily, from some of the trends affecting the print newspaper business: the need for deep staff cuts.

The 18-month-old digital pub will cut 50 employees from its current workforce of 170, the publication announced Tuesday, or 29% of its workforce.

The axe will fall heavily on staffers for the editorial page, which is being cut as a stand-alone section, as well as sports, which will henceforth be produced by content partners like Fox Sports. Layoffs will also affect design and production staff.

The staff cuts are part of a broader overhaul that aims to reduce costs and put the publication on a firmer financial footing.

Among other changes, The Daily will now appear only in portrait format, eliminating the need to create a landscape format for every piece of content. However, the publication emphasized it remains committed to its core mission of original reporting and compelling photography and video.

The news of staff cuts at The Daily comes on the heels of News Corp.’s announcement that it will spin off its newspapers to focus on its entertainment properties. While it has succeeded in attracting over 100,000 subscribers, the staff reductions could be seen as another rebuff for an embattled Rupert Murdoch, who championed the publication as a digital trailblazer.