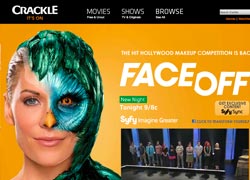 This week Sony announced that its Crackle video player app has been downloaded over 11 million times. It launched a Windows Phone and Nook Tablet version with Kindle Fire on the way. It also launched a version 3 of its app across all other platforms. In a relatively quiet way, the company has delivered the Crackle brand to the Xbox 360, Roku box, Sony BD players, the PS3, Google TV, and of course, Sony connected TVs.

The interesting thing about Crackle is that it is fully ad-supported on-demand TV and movie viewing. The catalog admittedly is not nearly as comprehensive as Hulu’s or Netflix’s, and does not approach the premium content quality of an HBO Go. But it is free, and it is available almost everywhere that its paid rivals are.

This is a fair place to find a fair catalog of b-grade titles with a smattering of more attractive features. It reminds us of the early days of Netflix’s streaming media catalog -- before the company figured out that this was the core of its business. And of course the catalog is heavy with Sony-owned content from Sony and Columbia. Hey, Sony is Sony. These guys are nothing if not proprietary and obsessed with “synergy.”

Most notably, Sony is throwing some of its money around with exclusive series like Jerry Seinfeld’s "Comedians in Cars Getting Coffee" and a music series from Radiohead producer Nigel Godrich.

Sony’s biggest weaknesses as a media and hardware company continue to show here. Crackle’s eagerness to create a platform of its own with little regard for partnerships, other players, or consumer convenience is evident in the limited catalog and the relentless pushing of its own content. In most things it does, there is a ham-handed obtuseness to the company about consumer ease of use. Proprietary memory cards and disc (remember the PSP UD drive?) and even weirdly oversized AC adapters for their handheld game consoles are all hallmarks of Sony myopia. The mobile app versions of Crackle all use the term “Watchlist” for compiling queues of content, but the Web site has your Queue. Whether and how the apps synchronize with one another is still a bit of a mystery to me too.

For reasons that are entirely beyond me, Sony has a habit of making some of the most unappealing and unfriendly interfaces for its devices, and that shows through here. The interface niceties of Netflix and Hulu are absent here. The iPad version of the app has an undersized and cheesy networked ad banner that feels like a blown-up mobile ad.

But Crackle is ad-supported -- a model for on-demand content that can’t be ignored. As the TV and on-demand everywhere models evolve on devices, there surely will be a place for alternatives to the paid models that dominate elsewhere. While Sony’s marketing of Crackle and its design sense do not inspire confidence in the brand’s path to success, there is always the chance they will trip into something here.