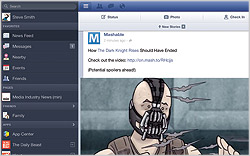 You know that Facebook has arrived as both a company and as a cultural force when news of an upgrade to the mobile apps makes national news. From The New York Times to CNN, we got coverage yesterday of a new smartphone version of Facebook that purports to be faster and represents the company’s shift toward a more mobile-first mentality. In the coverage, Facebook executives were unusually visible and vocal about the improvements. Oh, what a difference a market thumping makes.

Facebook appears to have learned its lesson from the weaknesses of its most recent attempts to make sites and apps pull from a common mobile Web base. The old apps were just wrappers for the Web site. Last year when the approach was outlined, Facebook engineers touted its ability to update all app experiences on all platforms very quickly.

Well, it turns out only the Facebook engineers enjoyed being fleet of foot, because their user experience certainly wasn’t. The basic awfulness of using the earlier Facebook app only underscored the point that speed matters in mobile. The notorious sluggishness of getting updates from the app were enough to make a user think twice about loading it while waiting on a short bank line.

This is version 5.0 in iOS and labeled 1.9.8 in Google Play when I downloaded the Android version to the Nexus 7. Facebook has turned to native code for these apps now. Actually, to Facebook’s credit, it made speed the actual theme of this update, recognizing that addressing this issue was its main concern. Pictures are said to load faster, as well as new content.

Which begs the question of whether this is a faster experience. Well, put it this way: it couldn’t be slower and not be broken. While still what I would call sluggish, Facebook on both phone and iPad is now usable. What may be more impressive and important to marketers in the end is the image handling. I like the simple swipe gesture that closes a full-screen image. And the images are foremost in the feeds. Also good for marketers is what feels to me like a faster embedded Web browsing experience. Clicking through on a link often resulted for me in the same frustration as everything else in the Facebook apps -- the kind of waits that make you think the app broke.

Everything I just said applied to the iOS versions, however. The Android version (on a 7-inch tablet – Nexus 7) was more jagged. The feed refresh blanked the whole screen while pulling new data from the ether. The full-screen images did not respond to the swipe-down movement that let them elegantly slip back into the feed in the iOS versions. And generally, all data refreshes felt slower. Limited as my use of the Android version may be, it seemed clear from the initial load that the focus had been on optimizing for iOS.

The update is overdue and welcome. It underscores the importance of performance in app recidivism and reuse. I wouldn’t say that the new Facebook version is especially entertaining or fun to use. But one no longer opens it with a sense of dread. For marketers, no matter how their messages end up being shown in the Facebook experience, they benefit from a smoother environment. Slowly but surely, Facebook is shedding its dorm room roots and engineers’ sensibility. But it reminds us how these touchscreens raised the bar when it came to being satisfied with software.

Metrics show that people go back to apps they simply enjoy. In the first waves of digital media, designers touted “ease of use.” In touch-enabled apps we should be talking more about -- and targeting -- “Joy of Use.”