Mobile In, Mobile Out: 'WSJ' Reporters Vlog From The Field 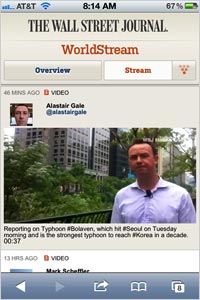 We have already seen what mobile video can do to enhance traditional media with citizen journalism. From rare images of natural disasters to otherwise blacked-out footage of government crackdowns worldwide, the video-everywhere technology of the smartphone era has literally opened up new views of the world already. What happens when you put that power into the hands of a network of journalists around the globe and then make those video posts grabbed with smartphones available to everyone on all their devices in near-real time? That is pretty much the model at WSJ WorldStream.

WorldStream is using technology from Tout to capture and send video from more than 2,000 journalists armed with iPhones. The results are probably best viewed on the Web app page for the project at wsj.com/worldstream. The output is mobile-friendly in form as well. The clips generally are under a minute in length. The Tout app allows the reporters to send video clips to WSJ Live editors who review and post, sometimes in a matter of minutes. This week the output includes many clips from Republican luminaries in the back halls of the Tampa Convention. You rarely hear Newt Gingrich contained in a 10-second sound bite, but you will here. And then of course there is the hurricane footage.

In addition to the Web app being formatted nicely for smartphone access, it also allows for customization. You can uncheck trends and tags that are of no interest to you to filter the stream.

The video will be used across multiple channels. WSJ Live will be embedding the clips in stories it is posting to its growing video enterprise. The company says its monthly delivery of video has doubled to 20 million streams. The clips will be distributed on twitter under the #worldstream hashtag as well to optimize social sharing.

Having a channel for near-raw video of newsworthy subjects taken and consumed on devices is cool conceptually. My guess is that in the long term, the WorldStream site itself is most interesting as a source for footage that either finds its way into the right story context elsewhere at WSJ or finds the right audience through social channels.

Aside from highly verticalized user-gen portals like YouTube itself, I am not sure many people actually decide out of the blue they are in the mood for some digital video for its own sake. On the other hand, tie a video clip feed like this to a truly personalized alert system and you may be onto the next mobilized and video form of feed reading. How about if we got an app alert whenever a new clip involving our favorite candidate entered the stream? Or we decide there is a story we want to track and see all reporter-made and user-generated clips on it as they come into the digital ecosystem?