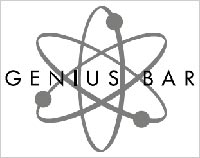 Those of you of a certain age will appreciate the reference to the late George Carlin’s incredible media rant of the 70s about “The Seven Words You Can Never Say On Television” (Class Clown album, 1972). But decades later the dark art of sanitized speech is not being enforced by uptight network censors and the prudes of the FCC. It is being promulgated at your local Genius Bar.

In a wonderful coup, tech site Gizmodo has gotten its mitts on a copy of Apple’s own “Genius Training Student Manual.” It appears to be, in Gizmodo’s breathless retelling, a primer in using language and behavioral monitoring to guide the customer toward feeling happy, happy, happy about the Apple brand when they leave.

But first the words a Genius is never supposed to utter.

Or at least those are the five visible in Gizmodo’s image of the Do Not Use column in the instructional chart “Get to Yes by Avoiding Negativity.” Talk about channeling the Zen-Steve.

Your iPad did not “bomb,” “crash” or “hang.” It just “stopped responding.” You don’t have a “bug” or even a “problem” in that iMac. It is more like a “condition” or a “situation.” This reminds me of another Carlin routine in which he compares the pastoral terminology of baseball (field, bases, home) to the militaristic ones of football (goal, advance, penalty).

In this case, the Apple manual appears to train the Genius to manage the exchange between customer and Genius at every level. Not only is language managed, but so is tone. The Genius is taught to respond empathetically. In sample exchanges the Genius even shares the customer sentiment that he thought the price of a Mac was too high…until he really experienced the “value.”

And the Genius you work with at the Bar is not only well-versed in the Apple machinery. He or she is supposed to be adept at working your levers and buttons, too. Part of the training involves outlining basic body language so the Apple staffer can read customer attitude in gestures. Short breaths indicate frustration, as does a palm to the back of the neck. Sitting on the edge of the chair suggests their cooperation. And some are just too cartoonishly stereotypical to believe. “Stroking chin” means evaluation. Well, yeah -- in Bug Bunny shorts, it does.

As with all things Apple, it sounds here like a good basic idea (make the customer happy and understand where she is coming from) is taken to Jobs-ian excess and control freakery.

On the other hand -- whatever works. According to TechCrunch, an NPD study has found that 31% of consumers had a better perception of Apple after visiting a Genius Bar. And around 90% of those who took things to be fixed at the Genius Bar rated the experience very or extremely satisfying.

Or there is some subliminal crap going on from those backlit atom icons in the background.

apple, mobile
5 comments about "The Five Dirty Words Apple Geniuses Can Never Say At The Bar ".
Check to receive email when comments are posted.
Read more comments >
Next story loading