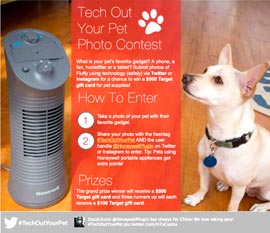 The makers of fans and air purifiers are asking consumers to submit a photo of their pet using its favorite gadget.

The company is promoting the contest on a dedicated Facebook tab at  http://www.facebook.com/HoneywellPluggedIn/app_448190101888439.

The page features some of the submissions, including a dog wearing headphones and listening to a boom box, a cat using a laptop with the Honeywell Facebook page featured, a cat using an iPhone and a dog with a cordless phone in its mouth.

Some suggested gadgets include fans, humidifiers, remote controls and TVs.

Pets using Honeywell portable appliances get extra points, according to the company. Actually, one grand prize winner and three runners-up winners will be determined on Sept. 18 by a random drawing from all eligible entries received by the end of the entry period.

Entrants may submit multiple photographs as Submissions, but each photograph may only be tweeted/submitted once. Re-Tweets are not eligible for entry as photographs must be original works.