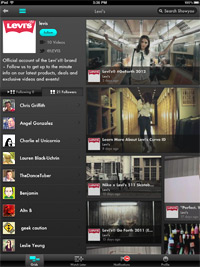 Omnicom Media Group’s OMD is partnering with Showyou to plant clients’ branded video clips into the iPad video aggregator’s mix. The New York Times reports that brands including Doritos, Levi’s, Monster, Showtime and Mountain Dew were among the companies invited to include their brand clips among the collection of clips that are gathered form the users’ social network and curated by Showyou.

According to Pandodaily, a recent redesign of the app added categories of popular videos in addition to the usual stream of media recommended and watched by friends. The more formal content structure will help the app maker create a safer, more well-lit place for advertisers to place their clips. The advertising clips will appear one or twice in every screen of about 15 video thumbnails.

OMD told the Times that it liked how the model put clients somewhere in between the traditional ad space and content space. “We don’t have a lot of companies that say, 'give us 50 banners'," said OMD CEO Alan Cohen.

True enough. And the model is a good post-pre-roll era play for advertising-as-content. But the onus is on the advertiser here to make those clips as interesting as the ones your friends ordinarily recommend. In my Showyou interface today Levi’s pops up in the menu as a Featured provider. But I can’t say that any of the thumbnails in its window of ads is grabbing me with anything more than what appears to be a collection of TV spots.

Showyou tells me that the advertisers get their own featured channels in the slide-in menu, but that their videos also rotate into the general feed of videos you see. The advertisers are guaranteed an appearance in the first screens of thumbnails, with each instance designated as a sponsored clip. Levi's and Showtime sponsorships were visible on the floating wall of clips when we visited Showyou. But the brand video that I see in my stream that is most inviting is the new viral hit from Old Spice, in which a buff muscleman plays countless musical instruments via sensors attached to each muscle group.

“What the hell?” my wife asked when I AirPlayed that one last night onto the 60-incher.

“I think it is a guy playing a one-man band by flexing his muscles.”

“This is work?” she chides.

“This is what these people do for a living -- trying to get your attention in the video-verse with crazy stunts.”