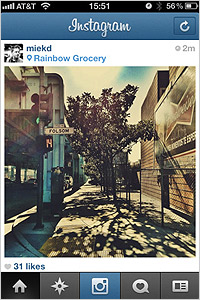 A recent study by app analytics firm found Instagram has become the second-most-popular app behind Facebook globally. It was the most-downloaded social app in July across the 10 largest markets it tracks.

Ben Schachter, an analyst at Macquarie Securities weighs in with anecdotal evidence of Instagram's growing popularity, especially among teens. Based on interviewing a panel of six Facebook and Instagram users ages 17-28, he issued a report over the weekend with the following key findings:

*Facebook still plays a large role, but mostly because it aggregates all their social connections in one place.

*Nearly all said that they expect to use Facebook less six months from now versus today.

When it comes to advertising on Facebook, the consensus was that no one clicks on ads and that ads introduced into the news feed earlier this year are annoying. While the report acknowledged that a panel of six (five females, one male) is only a tiny sample, it believes more young people are discussing shifting away from Facebook to Instagram.

Macquarie had convened the group after hearing informally about young people starting to spend more time on Instagram than Facebook. Facebook acquired Instagram in April for $1 billion, partly to neutralize a rapidly rising rival.

“While we have yet to see any hard data on this ... we believe that the trend is accelerating. We have not heard that this trend is impacting older Facebook users much yet,” stated the research note.

The panelists are looking for social networking alternatives because they're turned off by Facebook features --  including the Timeline, which they find too convoluted and “creepy," since it allows people to scroll back years into a user's history of photos and comments. That has led many to adopt aliases on the service -- an important point given that real names are required (in theory) to help Facebook advertisers distinguish between their targeted audiences.

Instagram was favored by the group as the best option “to capture a moment, highlights of my day,” and, counterintuitively, since most of their Facebook friends are not on the photo-sharing service. That suggests people are looking for ways to reach smaller groups of “real” friends, with females seemingly more drawn to Instagram than males. In addition to Instagram, people are also turning to social platforms like Tumblr, Pinterest, SnapChat, and Path as Facebook replacements.

While Facebook still plays a large role, the shift toward mobile use is leading to more passive interaction with the site. Instead of signing in to see what friends are doing, users only monitor Facebook through “notifications” pushed to their phones or tablets rather than laptops or desktop PCs.

Instagram.com was the top-gaining site in July, with its audience growing 38% to 22.7 million from June.