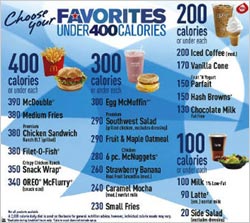 Starting next week, McDonald’s will list calorie information for all items on its restaurant and drive-through menus nationwide.

In addition, the chain announced that it is testing new items with the intention of adding more options to its 2013 menu that include recommended food groups from the U.S. Dept. of Agriculture’s 2010 Dietary Guidelines for Americans.

Options being tested include more seasonal fruits and vegetables, produce side items, grilled chicken in Happy Meals, McWraps that include vegetables and start at 350 calories, and breakfast items such as an egg-white sandwich on a whole-grain English muffin.

McDonald’s also released its first “nutrition progress report,” and said it will soon introduce a voluntary nutrition e-learning program for its 750,000 U.S. employees.

While McDonald’s isn’t the first restaurant chain to post calories in all outlets -- Panera Bread and Au Bon Pain are among those that already do so -- the move puts McDonald’s out in front of its biggest competitors and most other chains, noted Margo G. Wootan, nutrition policy director for the Center for Science in the Public Interest, who applauded the initiative.

In April 2011, the Food and Drug Administration issued proposed rules requiring restaurant chains with 20 or more locations and other eating venues to post calories. Those rules have yet to be finalized, although they may still go into effect this year, as originally expected. Meanwhile, in efforts to stem the growing obesity crisis in America, local and state governments including New York City, California and Vermont already require restaurant chains to post calories.

McDonald’s new initiatives are the latest in a series aimed at addressing growing consumer and governmental concerns about fast food’s role in obesity, as well as positioning itself to attract and build loyalty among increasingly nutrition- and health-conscious consumers.

"At McDonald's, we recognize customers want to know more about the nutrition content of the food and beverages they order," said McDonald’s USA President Jan Fields, in a release announcing the new moves. “As a company that has provided nutrition information for more than 30 years, we are pleased to add to the ways we make nutrition information available to our customers and employees." During a press conference, Fields also stressed that “calories are just part of the story.”

In early 2011, McDonald’s introduced its oatmeal breakfast option, and began reducing sodium content (it reports that sodium in its core national menu items has been reduced by more than 11%). It announced a formal “Commitments to Offer Improved Nutrition Choices” plan last July, and late last year launched an informational “nutrition-on-the-go” app (since downloaded more than 290,000 times) and an updated, customizable online meal-builder.

This past March, McDonald’s launched its new Happy Meal, which now automatically includes Apple Slices and a kid-size fry, and offers fat-free chocolate milk as a beverage option. In its new announcements, it also stressed its participation in the Children’s Food and Beverage Advertising Initiative Food Pledge and its efforts to incorporate “positive nutrition and/or active lifestyle” messaging in its TV ads and Happy Meal site and packaging.

In addition, since this summer, McDonald’s menu boards have featured a section showing favorite food items that have fewer than 400 calories.

According to CSPI’s Wootan, most large studies of the impacts of posting calories in restaurants have shown that this is helping consumers make lower-calorie choices.

“With Americans now getting about a third of their calories outside the home, people need more options that are healthy, appealing, and competitively priced,” she said.