Samsung To Apple: It's On! 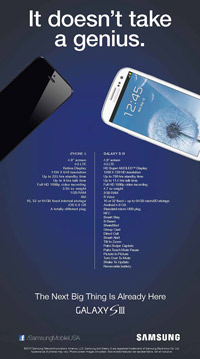 The kind of hype Apple generates for what amounts to nice but unremarkable upgrades to existing products (yeah, we’re looking at you, iPhone 5!) has got to make any other marketer envious. And if you are Samsung, this kind of annual ritual of corporate worship has got to make you livid. Obviously, the other major smartphone manufacturer in the world is not taking it lying down this year.

Samsung’s approach to Apple is questionable, to be sure -- mockery. Last year it chortled over fan boys waiting in line for the "next big thing" Samsung already had out (including 4G). This year in response to iPhone 5 frenzy, a print series launches this week that pits the new iPhone against the Samsung Galaxy S III, with larger screen, AMOLED display, more memory, and you know -- that inexplicable Samsung aura. The essence of the ad is a side-by-side spec smackdown. Ho hum.

But apparently, the company is quite serious about countering the Apple rollout with a big reveal of its own at the Mobile World Congress in Barcelona early next year. News site AfterDawn quoted an unnamed Samsung source claiming the Galaxy S4 will be launched at the show. According to reports and rumors, the S4 may have a 5-inch screen, with an even faster processor. Yadda Yadda.

The executive also said that Samsung would be charging Apple more for using its mobile application processors and that the company has “edges in manufacturing” that will become clearer as the patent suits between the two companies evolve. There are reports that Samsung plans to sue Apple over the iPhone 5 and its implementation of 4G LTE chips.

We’re sure this is frustrating for Samsung -- to sell smartphones as aggressively and successfully as Apple, and yet somehow to suffer an absence of cool. I am not sure that derision is the right tactic. After all, it is hard to keep that tone laser targeted only on the core fan boy and not somehow touch the many more millions who have an admiring curiosity of the rival company.

At any rate, the irony is that on paper Samsung already has most -- and perhaps more -- of the cross-platform elements Apple is pursuing. Its massive presence in the living room, with arguably some of the best smart TV interfaces, is years away from Apple. It has smartphone and TV and its hands into countless household appliances whose potential when similarly connected to the Internet is only a dream for now. Former AOL content chief David Eun is running content development, and their emerging ad network is poised to run promotions across multiple platforms. No matter how much their responses to Apple sometimes seem like frustrated flailing, there is a real infrastructure being built there that theoretically should be formidable.

apple, mobile
1 comment about "Samsung To Apple: It's On!".
Check to receive email when comments are posted.
Next story loading