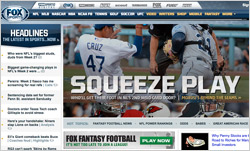 From true fanatics to casual viewers, TV remains the dominant channel through which consumers get their sports fix.

One-half -- 49.8% -- of all sports fans say the television is still their primary source for sports information, according to a recent survey of 950 U.S. online adults by Burst Media.

Still, more than a quarter -- 26.5% -- now cite content Web sites as their main connection to sports.

Interestingly, among all sports fans, the divide between television and content sites is reduced significantly -- by 17.4% -- when it comes to which medium respondents say is the best for sports news and information, versus what they indicated was their primary medium.

What’s more, one third -- 35.1% -- of all sports fans report going online at least once per day for sports-related reasons, with far more devoted fans -- 66.8% -- making their daily pilgrimage to the Web.

In the social media realm, one-third -- 34.7% -- of 18- to-34-year-olds frequently or very frequently use social media to comment on, tweet/retweet, share or link to online sports content and video.

Sports fans are also tablet and smartphone multitaskers, as one-third -- 35.7% -- say they use tablets and/or smartphones to access online sports content while watching sports on television.

Devoted sports fans are overwhelmingly -- 79.0% -- male, while the gender breakdown among casual fans is evenly split. Spanning socioeconomic categories, one half -- 50.6% -- of all devoted fans have at least a college degree, while 43.7 reside in high-income households.