The Whole Story: Tablet Users: Where Are They Now?

Much of the recent press in the media trades surrounding tablets has focused on the use of the device as a companion screen while viewing TV.  However, while this is undoubtedly an exciting area that promises much for the future of engagement and interaction with both programming and advertising, there are many other things about tablets that warrant our attention. For example, the characteristics that define tablet users.

As part of a USA TouchPoints analysis of tablet users relative to a more general sample of Adults 18-64, we looked at a number of behavioral indicators to see how they indexed against the norm. One of those was the contextual variable of where tablet users are likely to be found at any point during the average week — with or without their tablets — relative to all adults.

Such information sheds light on the kind of people tablet users are, and the messaging and content that might be more effective in gaining the required response to a call to action. 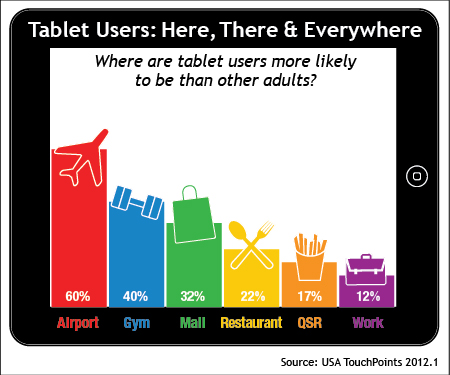 The fact that tablet users are 60% more likely to be at an airport in an average week is perhaps not surprising, given that many early adopters were affluent business people.  Any trip to the airport almost guarantees more sightings than normal of people perusing their iPads or similar devices.

To a lesser extent, the 40% higher-than-normal presence of tablet users at the gym may also relate — at least in part — to affluence. (Gym memberships are a sometimes significant discretionary expense.) But it is also indicative of other lifestyle indicators, such as a commitment to health and wellness.  Following this rationale, it may also be the case that tablet owners would index high for related indicators, such as diet, physical activity, supplements, etc.

The presence at both mall and restaurant (32% and 22% more likely to be present in a given week than all adults) are also suggestive of a higher level of disposable income than the norm. Tablet users seem to like to shop and eat out –- including at QSRs (17% more likely).

demographics, tablet
2 comments about "The Whole Story: Tablet Users: Where Are They Now?".
Check to receive email when comments are posted.
Read more comments >
Next story loading