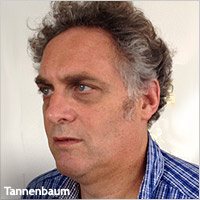 George Tannenbaum is a high-level creative director with decades of experience. In fact, he’s among the top ranks at r/ga as the executive creative director on the Ameriprise account. But check out his Web site, and you’ll see that he proudly lists himself as a copywriter first, a creative director second and a grown-up third. “I’m very much linguistically keen,” Tannenbaum says. “I like to look at words.”

And in his personal time, he writes Ad Aged, a blog on “the future of advertising, the decline of the English language and other frivolities.” A self-professed curmudgeon, Tannenbaum wittily riffs on everything from qr codes to project managers. “It puts pressure on me every day to write something, and I like that pressure,” Tannenbaum says. “Some people get a runner’s high when they exercise. I get a writer’s high when I write.”

While Tannenbaum is a dedicated wordsmith, he is also no slouch when it comes to digital. His career includes stints as executive creative director at Digitas, and he ran a major portion of Ogilvy Interactive as senior vice president/group creative director at Ogilvy & Mather. Under his aegis, R/GA has worked with Ameriprise to vastly improve its digital presence, revamping advisor Web sites and enacting a Facebook strategy, with mobile apps to come.

But Tannenbaum’s work on Ameriprise goes well beyond digital duties. R/GA, a digital shop famous for Nike+ and other transformative technology, is the lead creative agency on the account and has been charged with the task of producing more traditional work, like the aforementioned television commercials Tannenbaum scripted.

Last September saw the debut of the “Future”-themed Ameriprise campaign, which had at its core a series of spots starring Tommy Lee Jones. The actor, who will be featured in another round of commercials set for release in January, was cast because he is “no-bullshit” and “a straight shooter,” according to Tannenbaum.

The spots, directed by Errol Morris, are effectively simple, with Jones presenting Ameriprise’s long history of helping people save for the future, frankly, any advertising industry insider would take a look at them and assume they were the work of an agency known more for producing commercials, not whiz-bang tech.

And that’s a major win for r/ga. In the process of spearheading this Ameriprise work, Tannenbaum has provided R/GA with a creative credibility many digital shops haven’t attained. “R/GA is more than just incredible digital devices,” Tannenbaum says. “We can also do this deep creative work.”

That’s not to say that Tannenbaum, who joined R/GA in 2009, doesn’t have some wild digital dreams for Ameriprise that go well beyond what the agency has already done on the client’s behalf. Looking farther down the road, Tannenbaum has visions of R/GA developing a new communications system that would give Ameriprise clients the ability to collaborate virtually with their Ameriprise advisors.

Tannenbaum is telling Ameriprise’s brand story with a team at R/GA made up of members who, he notes, are in many cases 25 to 30 years younger than he is. “It’s completely egalitarian in a way a Soviet gulag would be. There’s no hierarchy whatsoever,” says Tannenbaum, who says that part of his job is to be there as a resource for his staff. As someone who came up in the business before the digital age, he says he often has a different perspective on how to produce advertising. “When I was young in the business, we all basically came from the same place. We all went to the same school to put our portfolios together. We all admired the same 20 or 30 people in the industry,” Tannenbaum reflects, noting, “Today, you mention Ed McCabe, and people will go, ‘Who?’”