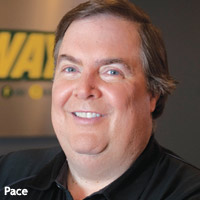 As senior vice president and global chief marketing officer for Subway, Tony Pace oversees an enormous staff tasked with a wide range of brand-bolstering activities. For previous employers Young & Rubicam and McCann Erickson, Pace led the marketing charge on behalf of behemoth-scale clients like Coca-Cola, Capital One, Kentucky Fried Chicken, Exxon and Texas Instruments. But when asked about the most challenging job he’s ever held, Pace starts talking about his college years.

“To be honest, it might’ve been as an undergrad when I was the editor-in-chief of The Observer, the student paper at Notre Dame,” he says, half-seriously. At the time, Notre Dame didn’t offer a journalism track, so recruiting was a big part of Pace’s job. Once he convinced classmates to join the editorial, advertising or production fray — he recalls his pay as $40 per week for a 70-hour-per-week job, so it’s not as if he had huge financial incentives to dangle — it was crucial to get everyone on the same page.

“I had to find different ways to communicate to different people. We all had to come together to deliver a message,” he says.

Left unsaid is that those two job responsibilities mirror — on a much, much, much smaller scale — his current ones at Subway. Among all the companies in the qsr (quick service restaurant) category, Subway has the most diverse slate of customers. Some respond to Subway’s healthy offerings, while others respond to what Pace calls its “more indulgent” ones; some respond to the value proposition (see under: “$5 footlong”); and some are more drawn to the Jared-tested promise that Subway’s sandwiches can play a major role in a weight-loss program.

“All those dimensions of the brand have to be out there in a way that makes sense,” Pace explains, emphasizing online and mobile channels. “If you’re not prominent in the digital space, you’re going to miss out.”

However, it was Subway’s relative silence in that space that, in part, lured Pace over from the agency world. After running accounts and offices alike, he wanted a new challenge, one that would tap his digital skills and appeal to his analytical bent. “With all due respect to the folks I worked with, I thought I had reached a point where I wanted to run a brand myself, rather than recommend how a brand should be run,” he recalls.

Given his aforementioned experience with A-list clients, Pace narrowed down the potential landing spots to three industries: soft drinks, financial services and restaurants. He eliminated soft drinks because he questioned the direction in which the business was moving, and financial services because “marketing is kind of an afterthought there.” When Subway came calling, the courtship was fast and easy: “The substance of the Subway business was greater than the perception of the Subway brand. That’s nirvana for a marketer.”

Pace was surprised to learn about Subway’s digital deficiencies when he arrived in January of 2006. “There was really no digital program of any substance,” he says plainly. He and his team set about remedying this immediately, with a program (“in retrospect, it was kind of rudimentary”) in which people who shared email addresses with Subway were encouraged to vote on the ending of a soon-to-be-televised commercial. Much to Pace’s surprise, Subway received hundreds of thousands of responses, even though participants were only given 36 hours to vote. Looking back, Pace describes the program as “the first a-ha moment. That was when we knew we had a brand that people wanted to engage with.”

The a-ha moments have piled up since then, owing to Subway’s canny approach to social media. Rather than creating a script and adhering to it — and in doing so, draining it of all life and spontaneity — Subway has trusted its “famous fans” to spread the gospel in a way that’s organic. Those fans, superstar athletes like Michael Phelps, CC Sabathia and Robert Griffin iii, have proved to be far more effective social brand ambassadors than Pace could ever have anticipated.

“A few years back, Michael Strahan took a picture of our menu and tweeted it out, with a message along the lines of, ‘All you guys who don’t think I eat here? Here you go,’ ” Pace says. “Did Michael know we would love that? Of course. But we didn’t prod him to do it.” Similarly, during the London Olympics, Ryan Seacrest took his syndicated radio show overseas, where he broadcast from the “Subway Studio.” After Pace helped coordinate the effort (and sent over a few sandwiches for good measure), Seacrest aired his appreciation on his mega-subscribed Twitter feed.

“There are folks in the organization who say that we should do more in social media, but we tend to err on the side of too little,” Pace notes. “Brands can be way too overbearing in social media, especially since consumers have the opportunity to get more of us if they want it. There’s a certain genuineness and authenticity that comes through when you don’t over-manage everything.”

That sense of perspective endears Pace to his Subway coworkers, as does his open-minded approach to the job. Subway has enjoyed a long relationship with espn, courtesy of the “Subway Fresh Take Hotline” featured prominently on espn Radio and espn podcasts. When Bill Simmons launched espn’s grantland.com offshoot, Subway didn’t wait to see whether his devoted-bordering-on-maniacal fan base would follow him to the new brand. “We took a priority position from day one,” Pace says. “It’s probably a little off-the-beaten-path for a brand of our size and scope to partner with something that’s a little bit niche, but the engagement is just tremendous. Being there early was the way to go.”

While Pace parses data from myriad programs on a daily basis, he doesn’t rely on it to the exclusion of other tools. Take his regular phone calls with Subway franchises, during which he receives first-hand testimony on consumer response to various products and pitches. “Beyond the numbers and reports we get, I like the anecdotal stuff from a trained set of eyes. That’s invaluable.”

Outside the office, Pace has time for his son’s hockey games and his daughter’s tennis matches and not a whole lot else. “I bite my tongue and try not to be the overbearing dad,” he jokes. He manages to find a few hours on autumn Saturdays to watch football; he remains a Notre Dame football fanatic and once cowrote a book about its legendary football program (Fighting’ Irish: The A-Z Notre Dame Football Trivia Book, still available on Amazon 15 years after publication). He hopes for Notre Dame to win big in 2012, stressing that an eight-win season, acceptable for most schools, “won’t cut it.” Not surprisingly, he expresses a similar competitive spirit when discussing Subway’s future.

“We need to extend our winning streak,” he says, referencing Subway’s jump from number five to number two (behind McDonald’s) in the qsr category. “Some people say we should just ‘maintain,’ but when you try to maintain you usually fall back. We have a lot of freedom to try new things. Now’s the time to be learning and growing.”