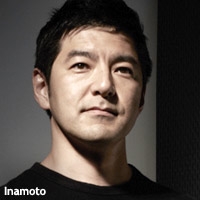 “I don’t really like advertising,” Rei Inamoto will tell you. His celebrated work in the field is marked by the very same thing that brought him to the industry: his belief that there must be better ways. Many accolades and happy clients can testify that Inamoto is among the best at finding them.

Some of his most lauded and successful work doesn’t look very much like advertising at all, but more like products. And Inamoto’s background has an awful lot to do with that.

A very young Rei Inamoto followed his interests and passions all the way from Tokyo to an international high school in Switzerland to the University of Michigan, where, at 17, he traveled to study fine arts, later adding computer science to create what, in retrospect, wound up being the ideal double major. When asked, though, if in college he had in mind something like the career he’s had, Inamoto jokes, “I wasn’t that smart.” Like many students he was just following his muse. In the mid-nineties, when Inamoto was pursuing his bfa, computers were beginning to be taken more seriously as tools for artistic creation, but he says in using them he became frustrated with their limitations. “So out of that frustration,” Inamoto now says, “my logic was, if I can create tools that would allow me to make my own art, then my expression can be that much more diverse.” So it was that Inamoto came to pursue the two degrees. “By day,” he says, “I was hanging out with the freaks, and by night I was hanging out with the geeks.” These days you might say that Inamoto has better melded that digital and artistic coin into passions that still even now fuel the work of akqa.

But when Inamoto first graduated he left college with a vague notion that he wanted to do “something creative and design-related.” So he and his twin brother decamped for New York because, he says, he thought, “That’s where things happened.” And happen they did. After a stint at D’Arcy MacManus (now part of Publicis), Inamoto began a scorching run at R/GA in 1999, exiting in 2004 as executive creative director to join AKQA as global creative director; he was named Chief Creative Officer in 2008.

Throughout his career and international travels, Inamoto has bridged the gap between people who communicate in various ways — people who speak different languages both literally and figuratively. If you think about it, the typical global digital agency could easily degenerate into a modern-day Tower of Babel, with coders in San Francisco clashing with account reps in Shanghai, and confusing creatives in New York. “Just because you speak the same language doesn’t mean you are talking about the same thing,” Rei says, with the insight of someone who has spent years navigating these waters and is uniquely qualified to do so. By way of example, he says, “Technical people and creative people have different ways of interpreting things and different ways of coming up with solutions. One is not more correct or right — it’s just two different ways of doing things.”

Both personally and professionally, Inamoto continues to straddle many cultures at once. He’s both artist and coder, both Japanese and a New Yorker. These dualities manifest in various ways; for instance, when asked if he roots for the Mets or the Yankees, Inamoto laughs heartily and says he began rooting for the Yankees when Matsui played for them. And now that Ichiro is patrolling the outfield at The House that Ruth Built, Inamoto says he again has good reason.

In today’s world Inamoto says insights are driven by passions that transcend borders and disciplines. “Let’s say music is your passion or basketball is your passion,” he explains. “That becomes the common language.” It’s why a teen living in Tokyo might find he has a deeper connection with a high schooler living in Oakland than with his neighbor, and also why a brand might be able to reach both of them with the same message.

If he could go back and speak to his younger self, the young Rei living in New York, trying to scratch out his creative path, Inamoto says he’d read him a quote from legendary Saatchi Creative Director Paul Arden: “It’s not how good you are, but it’s how good you want to be.” Arden used the line as a title to a book eventually, but Inamoto says that just quote alone is “the piece of advice I wish I had when I was 21.” Somehow, it seems, that 21-year-old already knew it though.