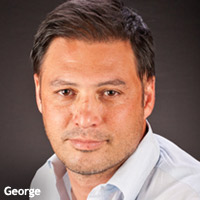 Looking to offer insight into how he views his role overseeing the ipg Media Lab, Quentin George cites a joke about three easy ways to lose big money: gambling, divorce and innovation. The New York lab shows off all kinds of futuristic products and experiences that might seem as quixotic to a cmo as a 500-channel universe did in the Mad Men era.

But George doesn’t view the lab as a leisurely field trip destination for marketers and agency executives. Instead it’s a chance for them to learn about solutions that can be rolled out now. Facial recognition, augmented reality, translucent digital signage, etc. The opportunities are all geared towards driving profits today.

Having been named Chief Innovation Officer for ipg’s Mediabrands last fall, George oversaw the move of the Lab from Los Angeles to New York. The shift was in line with what he refers to as his “manifest destiny,” an effort to better connect Silicon Valley with Madison Avenue.

Cutting-edge products coming out of the Valley need ad support, and advertisers need new ways to break through the clutter. Cooperation needs to go back and forth.

The Media Lab is not just a 5,000-square-foot showroom but an intended revenue generator. “The Lab is a for-profit agency,” George says. He reports to Mediabrands global chief Matt Seiler.

Action takes place off the showroom floor as the staff looks to develop opportunities for ipg clients and others. One recent project was advising Yahoo on how better to package inventory it has around tentpole events such as the Olympics. Another was helping a company with a long history of using loyalty cards to reinvent them for the new marketplace.

“Everyone comes to us with a unique problem and we come up with a unique solution,” says George, who also oversees Mediabrands’ intelligence practice.

The Lab as a broad operation also includes a Virtual Lab, another Valley-Madison Avenue link-up. It maintains a digital database of hundreds of companies developing new marketing solutions through technology, so that a client can be directed to a relevant one. “We call it the A-Ha! Directory,” the Lab says.

“We think that the combination of technology, content and brands is something no one else can do as well as we can … You can do two of those things really well, but the purpose is to activate those three communities,” George says.

In 2009, George, then Chief Digital Officer for Mediabrands, led the launch of a digital buying system designed to better capitalize on inventory by focusing on response more than exposure. “Instead of buying context, we buy audience,” George said.

George, a South African, joined ipg in the digital space in 2007 at Universal McCann, before moving to the top digital role at Mediabrands. In 2004, he joined digital agency Organic in a top role and oversaw initiatives for clients such as Sprint and Mitsubishi. Before Organic, he worked at Avenue A/Razorfish.

That followed his founding of his own agency, Cape Town-based Electric Ocean, which took home a Clio, unusual for an interactive shop back then. In 1999, fcb purchased the agency.

George spent his early years in South Africa in rural Welkom before attending the aaa School of Advertising, which is owned by the oversight body of the South African ad industry. Prior to that, he attended the Drakensberg Boys Choir School. He says his current singing pursuits are “only in the shower.”

It’s not hard to get him to marvel at his journey from the South African hinterlands to the vortex of crafting a role in a future of marketing with a technological underpinning. One, no less, where practicality is always in mind.