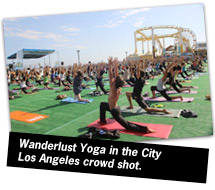 There are more than 20 million yogis in the United States, and the number is growing every day. When as many as 3,000 participants gather for a yoga/music festival, a yoga hip-hop artist like MC Yogi becomes the new rock star, and yoga teachers are the new celebrities. This month Health magazine’s Associate Publisher Lana LoRusso, who previously worked at sister Time Inc. magazine People (see, yoga is the new Hollywood!), partnered with Wanderlust for a free one-day urban yoga event in NYC, LA, and SF called Yoga in the City. Wanderlust also produces longer events, which are the largest multi-day yoga events in the world. 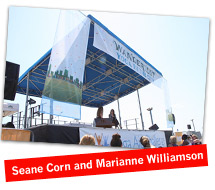 One of the things that makes yoga more than just exercise is the concept of seva, or selfless service. Seva, from the Sanskrit root sev (meaning to serve), is "an expression of compassion, the desire to uplift and assist others." It is a part of the yoga culture and in the very nature of these celebrity teachers to use their influence to inspire others to make a difference.

“Yoga in the City,” which took place here on Sept 9th, was a veritable who's who of meaningful causes. The festival itself was a fundraiser for Yoga Aid. Yoga Aid is trying to raise $1 million for charities around the world. Also on Sept. 9th, 20,000 yogis across the globe participated in a yoga relay that began in Sydney, Australia and ended 225 locations later, with a performance by MC Yogi in Los Angeles. MC was invited earlier this year by Michelle Obama to be an ambassador for her Let's Move cause. In 2008, MC produced a video -- “Obama 08-Vote For Hope” --  that went viral. His song “Be the Change” is a Ghandi-inspired call for activism.

One of the charities Yoga Aid partnered with was Off the Mat/Into the World. We talked to the impassioned and indefatigable Seane Corn, yogi, activist, and co-founder of Off the Mat/Into the World (OTM) a non-profit organization that bridges yoga and activism through local and international service projects. For example, their Empowered Youth Initiative works with youth gangs in Los Angeles, Yoga Votes is a non-partisan effort to encourage people in the yoga community to get out and vote, and the Global Seva Challenge focuses on international issues. 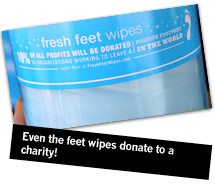 Since its inception the Global Seva Challenge has raised over $3 million. This year it will raise between $750K and $1.2 million, and will focus on India and sex trafficking. The Challenge has already sponsored successful projects in Cambodia, South Africa, Uganda, and Haiti. Each year they focus on the most relevant issues in that country: AIDS, micro-loans, turning shipping containers into sustainable schoolrooms, etc. Next year they will focus on the Ecuadorian rain forest and oil, and the effects it has on indigenous populations as well as the health of the planet. When describing the broad expanse of OTM, Seane said, "we raise money, train leaders, and execute projects." Seane is modest about her celebrity status and huge following, but she does realize she has access to 20 million people (she just returned from teaching yoga at both the RNC and the DNC) and is willing to use that popularity to make a serious difference in the world. 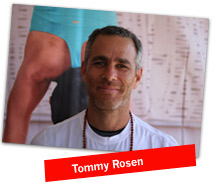 "Our deepest fear is not that we are inadequate. Our deepest fear is that we are powerful beyond measure." That beautiful and inspiring quote, often erroneously attributed to Nelson Mandela, was actually written by author and activist Marianne Williamson. It goes on to say: "Your playing small does not serve the world." Marianne doesn't play small and she does serve. She founded Project Angel Food, a meals-on-wheels program serving homebound people with AIDS in LA. She founded the Peace Alliance, an international network of peace activists currently trying to establish a United States Department of Peace.

Marianne has written ten books -- including four New York Times No. 1 bestsellers -- and she has appeared many times on the Oprah show, Larry King, and “Good Morning America.” She appeared at Yoga in the City to talk about her most recent project, Sister Giant, her attempt to bring a higher consciousness into politics. When I asked her about yoga/spirituality and its place in politics, Marianne said, "yoga isn't just about how I stand in my body, but how I stand in the world. Am I standing correctly in the world? Am I taking the right position?" Newsweek named Marianne one of the 50 most influential baby boomers. And she too -- although extremely modest -- is happy to use that influence to initiate change. 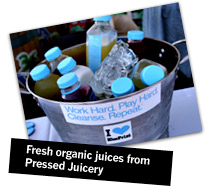 Every teacher, speaker, and the festival itself had an important cause they were involved with, raise money for, or work with (even the foot wipes and mat wipes donate 10% of their profits to the cause Positive Footprint In The World). The yoga industry is a $6 billion-a-year industry. Today there are yoga programs for homeless youth, yoga prison programs, yoga for veterans with PTSD, yoga and recovery programs, yoga for AIDS patients, and the list goes on. Anywhere there is a need, a teacher steps up to fill it. And the bigger the teacher, the bigger the need they can fill. This breed of celebrity tries to use their influence for philanthropic causes, and to call others to action. They don’t just talk the talk -- they walk the downdog.