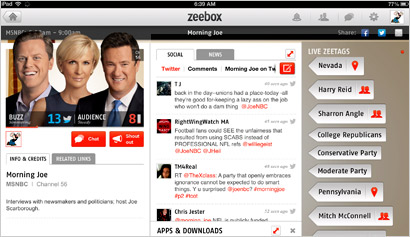 Crazed teen girls are not greeting this app at the New York airport, but from talking to some people in the video and TV industries, you would think that the arrival of UK-based Zeebox was another British Invasion. When talking to insiders about second-screen programming and apps, more than a few have said that in one way or another, "Zeebox is going to make a splash here."

In the UK last week at OMMA Mobile it was the app everyone seemed to mention. The region locking in the iTunes Store prevented me from checking the app out for myself, but I had to wonder, was a second-screen app really that good? I mean, it isn’t as if we suffer a dearth of them here in the U.S.: Shazam, GetGlue, IntoNow, Miso, etc. Well, now we get to find out. The U.S. version of the app went live overnight.

The company launches into the U.S. market with some heavy partners, and that is critical to its success. Comcast Cable, NBCUniversal, HBO and Cinemax are all involved, supplying the all-important first-party cooperation and ancillary content to the app. More to the point, these companies are invested in Zeebox and will lend promotional support. Special emphasis is being placed on enhanced content for The Voice, Boardwalk Empire, True Blood and sports broadcasting like Notre Dame Football.

Part of Zeebox’s secret sauce is what it calls an OpenBox API that allows any TV content owner to add enhanced content to the experience. Just as importantly, a business model is built into the PAI, allowing for synchronized advertising to run across the second screen. Zeebox is available in iOS now and also in a Web-based version.

I will have to play with the app myself during prime time tonight, but its basic layout and feature set seem to deserve the advance hype. This app combines in one both a preview and discovery guide with synchronized social TV experiences. A 7-day guide both previews upcoming shows in your local grid and offers reminder alerts. You can check out what friends or TV watchers generally are buzzing about via Twitter and Facebook. There is a family-friendly mode for filtering social feeds, and slider privacy settings enable you to easily control how much of your TV viewing is being seen by your social graph. The app also allows you to invite friends into a private chat at any time.

The individual TV show pages are impressive in their depth and connectedness. You not only tap into the live flow of social chatter, but the app pulls out relevant iPad apps for the show (like the programmer or network’s own complementary apps). There is a cascade of “zeetags” extracted from the Social TV flow that allow you to pursue specific topics with additional information and related Twitter feeds.

In this morning’s SportCenter feed from ESPN, for instance, tags from the discussion led to data on “Earned Run” “Fenway Park” as well as all the people contributing to the feed. The experience of endlessly drilling into data is sumptuous. The Zeetags satisfy and streamline brilliantly that urge to run information searches on people and terms mentioned on-air. How it feels when trying to concentrate on the TV show itself may be another matter. One can imagine this app being a supreme distraction as much as a complement to that “first screen” experience.

Even at first glance, Zeebox appears to deserve much of the hype that preceded it. The layout is superb and looks so much better than many previous social TV apps that feel as they are scraping data and hastily stuffing it into a few templates. One of the problems with second-screen apps has been the aesthetic disconnect between the polish and professionalism of the TV experience and app interfaces that have the rough geeky feel of, well, Facebook and Twitter.

At the very least, this will be an app worth watching.