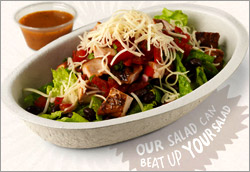 Market Force first calculated favorites based on the total number of votes, then indexed them by factoring in the number of locations for each chain for a more level view of the results.
By region, Chipotle ranks first in the Northeast and Midwest, but Baja Fresh is the favorite in the South, and Taco Cabana rules in the West. Conclusion: Chains’ popularity levels aren’t necessarily higher in the regions where their headquarters are based. (For instance, Irvine, Calif.-based Baja Fresh ranked fourth in the Western region, yet stole the first place spot in the South from Atlanta-based Moe’s Southwest Grill.)

“The fast-casual Mexican food phenomenon shows no signs of slowing down, but our research suggests that it’s no longer enough to just offer the lowest prices or largest number of menu options,” said Janet Eden-Harris, chief marketing officer for Market Force. “Instead, we’re seeing chains that are satisfying consumers’ taste for fresh ingredients, friendly service and a comfortable setting are emerging as the category leaders.”