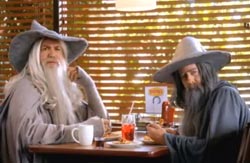 As initially reported in MarketingDaily on October 29, Denny’s has partnered with New Line Cinema and MGM for one of its largest-ever movie tie-ins, with “The Hobbit: An Expected Journey” to hit theaters on Dec. 14. Denny's, New Line Cinema, and MGM are all based in the Los Angeles area.

Starting Nov. 6, the fast-casual chain will feature a limited-time menu with 11 items themed to the movie, including a Hobbit Hole Breakfast, Frodo’s Pot Roast Skillet and a Build Your Own Hobbit Slam, which includes new holiday items like Pumpkin Patch Pancakes, Shire Sausage and Seed Cake French Toast.

In addition, with the purchase of select Hobbit-inspired entrées, guests will receive a trading card pack. Each pack includes collectible Hobbit cards (there are a total of 12 different cards to collect) and Denny’s coupons.

The humorous TV ad, already on YouTube, features real-life “Hobbit” fans dressed like the characters, enjoying a meal at Denny’s. It will begin airing on Nov. 12.

Marketing for the promotion began with an unbranded teaser campaign on billboards in the Los Angeles market and online banners. (The ads just stated: “Middle Earth is coming to America’s favorite diner,” in the recognizable font style created by author J.R.R. Tolkien.)