Today is Nov. 1, 2012, and the big 2012 election is only five days away. It’s only appropriate I write something about the upcoming election, otherwise risk being plowed over by the wave of election-related stories.

I don’t know how the election will end up (I have my personal preferences), or how Latinos will vote. Most political pundits seem to agree Hispanics will vote for the Democratic candidate, President Barack Obama, by a larger margin than they did in 2008. In 2008, Obama got 67% of the Latino vote compared with 31% for Republican candidate John McCain. Pundits predict Obama will get around 70% of the Latino vote this cycle. Moreover, many political pundits take these data points – 2008 actuals and 2012 projections – to proclaim Hispanics are more aligned with the Democrats, that they overwhelmingly align with Democratic policies, and that immigration is a defining issue for them and an issue where Republicans have increasingly alienated them.

Is there anything we, as Hispanic marketers, can take from all the data regarding Hispanic voting patterns and political attitudes? Are there any lessons to be learned or key insights to be gleaned from the 2012 election that can be applied to the broader world of Hispanic marketing?

Let’s start by understanding the Hispanic voter. According to the U.S. Census, there are 52 million Hispanics in the U.S. That number probably undercounts undocumented Hispanics by 10%, or roughly 5 million, according to common estimates. According to recent Pew Hispanic Center data, only 23.7 million Hispanics are eligible to vote – representing approximately 45.6% of the Hispanic population (assuming we use 52 million as a baseline). The rest are legal permanent residents, undocumented, and/or under the age of 18. However, only 10.9 million Hispanics are registered to vote (21%), and only 6.6 million voted in 2010 (12.7%). So when we talk about Hispanic voters, we are talking about a tiny sliver of the Hispanic population.

The first takeaway from Hispanic voting patterns is they don’t vote. Less than half are registered (45.5%), and fewer than 29% vote. This is significantly lower than African-Americans and whites, whose registrations figures are in the mid- to upper-60s. A big part of the reason lies in the demographic makeup of eligible Hispanic voters. According to Pew Hispanic, 32% of eligible Hispanic voters are 18-29, compared to 19% among whites and 25% among blacks. It’s a well-known fact younger people are less likely to register and vote. But there is more going on with Hispanics than just apathy due to youth. Some have pointed to a lack of information, not understanding how to register, and apathy.

I don’t buy the first two especially when you consider 75% of eligible Hispanic voters were born in the U.S. (and therefore likely speak English). That leaves apathy. Which, I think, is part of a larger underlying issue – a cultural lack of civic engagement that starts at home. Most eligible Hispanic voters are U.S.-born Mexicans (58%). They are the children, or grandchildren, of Mexican immigrants who bring a tradition of low civic engagement from Mexico – a country notorious for its history of political corruption. Many Hispanics grow up with no civic engagement. Hispanics from other Latin American nations (excluding Cubans) share similar home country political heritage.

The implication for Hispanic marketers is significant. These low levels of civic engagement inevitably point to lower levels of participation in key elements of the mainstream economy. They also point to low levels of participation in other activities considered mainstream – philanthropy (which I’ve discussed before), savings and investment, use of financial services (banking and insurance), and mainstream American health care (pharmaceuticals, health insurance).

Beyond participation and affiliation

There are some interesting trends and significant fluidity within the Hispanic voting population. Let’s look at political party identification first. While the polls change often, the average hovers at around 40% identifying as Democrats and 20% as Republicans. However, an increasing body of research points to Hispanics joining the national trend towards independence or no party affiliation. A July 2012 Gallup poll found a majority of U.S. Hispanics identify as political independents (51%) rather than as Democrats (32%) or Republicans (11%). Pew Research Center found similar results with 46% of Hispanics identifying as Independent, 32% as Democrat, and 11% as Republican. And the Hispanic vote is hardly static or tied to these trends in “party affiliation.” As recently as 2004, 44% of Hispanics voted for George W. Bush. Yet the Hispanic Republican vote dropped precipitously in two years, to 30% during the 2006 mid-term elections, with Democrats receiving 69% of Latino votes that year.

The takeaway is Hispanic voters are not “locked” into voting one particular way. They may have clear political party affiliation preferences towards Democrats, but their voting behavior is much more independent in nature, and likely to trend that direction in the future. For marketers, this fluidity is a crack in the long-held belief Hispanics are fiercely brand loyal. Numerous marketers have started questioning this theory, particularly when looking at younger, U.S.-born, more acculturated Hispanics. Party affiliation is the ultimate brand preference choice. These predominantly U.S.-born eligible Hispanic voters seem to exhibit very little political brand loyalty when it comes to making their purchase decision, – or vote – in the political context.

The trends for the future Latino voter can best be described as muddled. I did a quick breakdown of Hispanic trends, by party most likely to benefit: 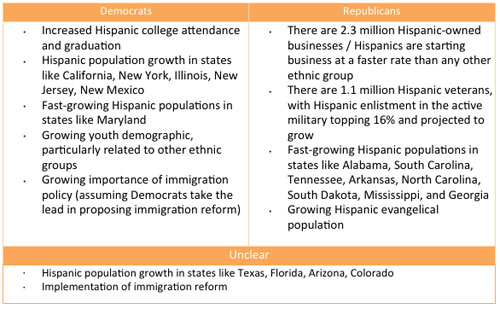 Politicians – like so many brands and marketers – have failed to figure out how to reach and engage the growing bilingual, bicultural Hispanic that makes up the majority of the Hispanic electorate. If you look at most of the Hispanic marketing and outreach efforts undertaken by both sides in 2012, you see a lot of Spanish-language materials and ads and some social media efforts. Most are aimed at partisans on each side of the political spectrum with little aimed at the independent, bilingual, English-preferring and younger Hispanic – ages 18-44 – which seems to represent the majority of the Hispanic electorate.

The 2012 election will likely accentuate the fact that Hispanics remain the biggest challenge and opportunity for both politicians and brands. It is a quickly evolving and fluid demographic, where the paradigms and assumptions of the past become increasingly irrelevant in the future.