Will The 'Mini' And Pint-Sized Tablets Affect User Behaviors? 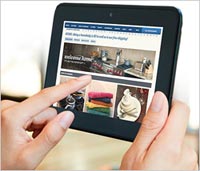 Many people regard the 7-inch tablets like Kindle Fire, Nook and Android-based models as “e-reader first” devices rather than app-centric or Web browsing gadgets. After all, Amazon and Barnes & Noble are booksellers first and foremost, there are too few Android apps designed for tablet screen sizes, and the browsing experience on some of these devices, to put it kindly, is challenged. Whatever the controversy around the price and display performance of the Apple iPad Mini, it does help goose the 7- to-8-inch tablet market and perhaps legitimize the smaller format as a more full-fledged iPad-like experience. But how do behaviors change across screen sizes?

How screens affect engagement and behavior will be deep and protracted questions that will evolve in coming years as users themselves become comfortable with different devices and settle on behaviors. But an early indication of how screen impacts action comes from the table platform Onswipe, which helps publishers more easily turn their standard Web sites into more touch-friendly tablet app-like sites for touch browsers. They now power over 1,200 sites, including brands from Bonnier and Vibe Media.

Their recent survey across these sites and almost 30 million uniques gives an early indication of how users engage smaller screens differently. For instance, on 10-inch tablets almost half (48%) of users share content via email and only 32% use Facebook and 13% use Twitter for content pass-alongs. The instance of social sharing seems to increase as we move to the 7-inch screens. On these smaller displays Onswipe sees only 29% sharing via email but 42% via Facebook and 24% via Twitter. On the iPhone, 32% share via email, 50% via Facebook, and 13% via Twitter. In some sense this difference reflects the way many people likely treat and set up their smaller tablets, especially if they own multiple screens. For instance, my iPad and iPhone have email accounts active, but not my 7-inch Kindle.

It is not surprising that iOS owns mobile Web traffic. At least as measured by Onswipe. More than 75% of Web traffic to their sites comes from an Apple device, compared to only 22.3% from Android. When it comes to tablet traffic, there is no contest. iPad gloms 98.10% of the traffic Onswipe sites get. I will be curious to see if the new generation of smaller tablets change this equation. Generally, browsing on the Nook, Kindle and even the Nexus 7 ranges from tedious to torture.

I am astonished at how sluggish the Nexus browser is, and browsing on Nook and Kindle still feel like afterthoughts. Whether the extra 35% of real estate on the iPad Mini makes a difference in browsing remains to be seen. More responsive design and HTML5 platforms like Onswipe certainly improve the experience. There is a tendency for people to use smaller tablets in portrait mode, which is natural for many e-books and even upscaled smartphone apps. But that default mode is not optimal for Web sites on a small screen. Onswipe found that 84% of people browsing the Web on the Kindle were using portrait, while 55% of iPad users were in landscape.

This is not to say that the smaller screens are doomed as Web browsers. Onswipe did find that among the small fraction of traffic that was coming from the Kindle Fire, for instance, session time at a site was actually 36.52% higher than it was on the iPad and 39.84% higher than on the Nexus 7. Onswipe speculates that Kindle Fire users are used to e-book mode and so tending toward longer reads anyway. That may be partially true, I suspect. My less charitable take is that Kindle Fire users are not thinking of their devices as Web browsers, and so are not engaging in the usual site hopping behavior. They will tend to go to a Web site for a specific reason and to engage specific content.

Much of this is just informed speculation until we get more rigorous research on multi-screen use. I suspect that the number of screens in someone’s life also has a deep effect on how she uses any one of them. I think we start triaging content on some screens for consumption on another and we parse our media now and consign it to different modes and times of day. The multiscreen era introduces not just a more fragmented landscape of media, but an increasingly nuanced and complex range of behaviors that will be challenging for marketers to track, let alone leverage.

google vs. apple, mobile, tablet
1 comment about "Will The 'Mini' And Pint-Sized Tablets Affect User Behaviors?".
Check to receive email when comments are posted.
Next story loading