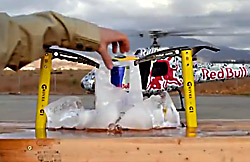 Thanks to an audacious branded content strategy, Red Bull had the best social video strategy of 2012.

That’s according to new research from AOL-owned video network gorival, which ranked top performers based on volume, total views and engagement for content uploaded to YouTube, Vimeo and Facebook throughout the year.

“Brands like Red Bull, Old Spice and Nike are risk-takers, constantly disrupting what’s expected to spark agenda-setting conversation,” according to Holmen. “An effective social video strategy can elevate a brand beyond the product, creating an experience consumers really want to be a part of.”

Both Apple and Microsoft were conspicuously missing from the year’s top 10 list, coming in 11th and 37th, respectively.

Among luxury fashion brands, Burberry ranked relatively low -- coming in at 16th -- despite its aggressive social media strategy. On the car front, BMW came out top in 12th, ahead of VW in 13th and Mercedes Benz in 15th.

Also of note, alcohol brands underperformed as a category, with Smirnoff topping the list in 90th followed by Corona in 93rd, and Jack Daniels in 99th place.

Visa, meanwhile, proved the exception to the norm in the financial sector. At 24th, it benefitted hugely from an aggressive video content program for its Olympic sponsorship, according to Holmen.

The brands evaluated were drawn from Interbrand’s 2012 Best Global Brands Report with the additions of Red Bull and Old Spice.