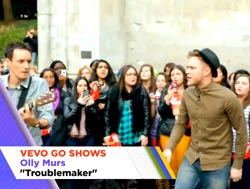 Video syndication network News Distribution Network (NDN) jumped to No. 3 in comScore’s ranking of the top online video properties in October, with an audience of 53.2 million, up from 40.5 million in September.

NDN distributes video to more than 4,500 news sites on behalf of content partners, including Reuters, AP, CBS, Fox Sports and The Weather Channel. Coverage of the presidential debates, the election and developments surrounding Hurricane Sandy played a role in boosting NDN’s audience in October.

The growing appetite for video among newspaper and other sites generally has also helped propel NDN’s rapid rise. Its surge last month pushed it just ahead of video heavyweights Vevo and AOL, which both drew audiences of about 53 million. Facebook slipped a notch to No. 6, despite traffic increasing about 1 million to 47.8 million in October.

Google Sites (YouTube) was again the dominant video property, with its audience holding steady at about 150 million from the prior month. Yahoo was No. 2 with traffic of 55.2 million, down from 57.3 million in September despite the continued expansion of its video offerings this fall. CBS Interactive broke back into the top 10 video sites with traffic of 31.8 million, while Amazon dropped out.

comScore said a total of 183 million U.S. Internet users watched more than 37 billion online videos in October. That’s up from 181 million viewers in September, but the number of videos watched is down from 39 million the prior month.

In terms of video advertising, BrightRoll surged ahead of Google Sites into the top spot, serving 1.8 billion videos in October. Google had 1.75 billion, followed by Hulu (1.5 billion), LiveRail.com (1.2 billion) and Adap.TV ( 1 billion).

Video ads served by BrightRoll reached nearly half (49.3%) of the total U.S. population. Hulu delivered by far the highest frequency of video ads to its viewers at an average of 59, while Google Sites was a distant second, with an average of 19 ads per viewer. Overall, Americans watched nearly 11 billion video ads in October.