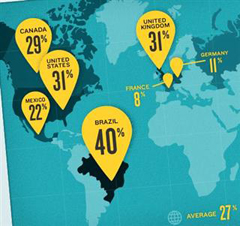 Black Friday is a peculiarly American (pick one) obsession/ritual/malady/boondoggle. But shopping clearly is not. And the centrality of the mobile device to e-commerce is even truer in some non-U.S. economies. To wit: m-commerce site developer Mobify surveyed 19,000 shoppers around the globe to determine how much of electronic buying is going on from handsets globally. In the U.S., 15% said they have purchased items from their smartphone and 9% have done so from a tablet.

Go outside the U.S. borders, however, and the role of mobile devices as a first screen to the Internet becomes more apparent. In Mexico, 20% were using phones to make purchases, in India, the percentage was 40% and in China, 46%. Curiously, it was some of the most developed Western and Asian digital economies -- the ones presumably with the best access to multiple screens -- where we see lower m-commerce penetration. Japan shows only 9% buying by phone, Germany 12% and South Korea about even with us at 16%.

Even more promising for m-commerce is the sheer velocity of the migration of e-commerce site visits from handsets, which we might regard as a preliminary behavior to converting to m-shopping. Mobify manages over 20,000 m-commerce sites worldwide for e-commerce retailers and it sees 31% of traffic already coming from devices in the U.S. But in Brazil it is already at 40%, South Korea 34% and in Australia 47%.

As the e-commerce infrastructure comes to support seamless shopping, cart and purchase experiences across platforms, we have to assume that a fair amount of that browsing by handset converts into actual purchasing.