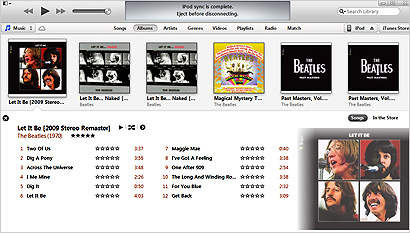 We've only had a few hours with the long-promised redesign of the iTunes software. This is the first major re-engineering of iTunes in a number of years. The software has been tasked with ever more duties since the mid 2000s, including the iCloud storage service, movie and TV rentals, app syncing with a growing family of devices, and a "Genius" recommendation system.

Truth be told, iTunes never was a pretty or clear experience in my mind. My few hours playing with the new interface do not lead me to believe they solved the clutter and complexity problem. The left nav bar for major functions like iPod, Music, TV, etc. is replaced by a simple drop-down menu so the screen can be filled with content rather than navigation.

The music interface strives to make the experience more tile-like. Clicking album art slides down a panel of individual songs that can be routed to playlists or put into a playing queue. Cloud icons on album art allow you to distinguish what is local from what is stored in Apple’s cloud service. One very nice touch is the integration of the music store in the library experience. From within any artist or album you can pull their top tunes in from the store for sampling and buying. Playlist creation is nominally easier to make and build.

The many rumors that Apple will start a Pandora-like Internet radio service get some support from the new queue list, a drop-down that allows you to monitor what songs are coming. You can delete or add to this list. One can imagine how this bit of business would be a great special feature of a subscription radio, perhaps along the lines of Spotify. In some sense this refresh of iTunes positions the software to pursue a few new models like that. Cloud services are more convenient now, and allow for streaming rather than forced downloads. Again, this is functionality that has that Netflix-like subscription content feel to it.

In fact, other than some speed, better shortcuts and rearranging familiar pieces, the promise of the new interface and functions seems to be aimed ahead at models that Apple is anticipating…or teasing.