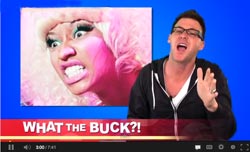 Nurturing the next wave of auteurs, Fullscreen on Friday committed $1 million to promote independent video producers on YouTube.

On the first of every month, the online video network plans to award marketing grants to four channels it considers to be doing great work. Individual grants will be limited to $10,000.

The money will pay for pre-roll advertising within the Fullscreen network, as well as a presence on Gorilla -- Fullscreen’s sponsorship and cross-promotional marketplace.

Content creators inside and outside of Fullsreen’s existing network will be considered for its so-called “Million Dollar Creator Fund.”

Using YouTube as its distribution platform, Fullscreen is one of a growing number of multichannel networks, or MCNs, that facilitate collaboration and cross-promotion within its network of producers.

“We want to be part of the supportive network in [content creators] life,” Phil Ranta, director of Channel Partnerships, said.

Fullscreen was founded in early 2011 by CEO George Strompolos, an ex-Google engineer. At Google, Strompolos is credited with helping to create the YouTube Partner Program, which bridges the gap between brand channels and viewers.

In September, Fullscreen’s YouTube channel attracted 25 million viewers, according to the latest comScore figures. That made it one of YouTube’s top partners, coming in just behind Warner Music with 26 million viewers last month.