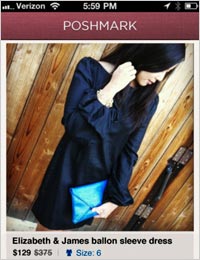 Applying the age-old clothing swap system to an increasingly mobile world, Poshmark encourages members to buy and sell fashion among themselves. The start-up also coordinates “Posh Parties” -- real-time shopping events where a mostly female user-base gathers to shop, share, and sell items from their smartphones.

Since its launch a year ago, users have flooded the marketplace with $100 million in items, according to Poshmark founder and CEO Manish Chandra.

Rather than embracing the elitism that is associated with some fashion brands and communities, Chandra said Poshmark nurtures an “inclusive community where diverse women across America” can bond through shopping and swapping.

Illustrating the strength of its community, Chandra said Poshmark is currently recording over 2 million monthly interactions between its members.

Chandra plans to use the additional capital to scale the company’s infrastructure, expand into new platforms, and hire more staff. Existing investors, including Mayfield Fund, Inventus Capital, and SoftTech VC, also participated in this round. Poshmark has now raised a total of $15.5 million to date.

Familiar with the online side of “fashion,” Menlo Ventures and Mayfield Fund portfolios are also invested in Fab.com, a design-centered deal site, which already boasts 10 million registered members worldwide.