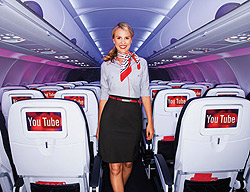 Expanding its reach upward, YouTube this week entered into a high-flying distribution deal with Virgin America.

Beginning Dec. 15, selections from YouTube’s new batch of premium content will be streamable on all Virgin America flights within the United States and Mexico.

Featured content will include Warner Brothers’ “H+ The Digital Series,” WIGS’ “Blue,” Geek & Sundry’s “Written By a Kid,” and Barely Political’s “The Key of Awesome.”

According to Danielle Tiedt, CMO of YouTube, the Virgin America deal is part of a broader strategy to make its video more accessible to busy consumers.

“Over the next year, we’ll unveil several more new and exciting ways for people to experience all that YouTube has to offer,” Tiedt explained in an email on Thursday.

Rather than videos of dogs on skateboards, Tiedt said the Google unit is focused on expanding its new premium network of programming. “We chose content that is reflective of the diversity available on YouTube right now,” Tiedt said, regarding the Virgin America partnership. “The selection provides a nice representation of the content our partners are creating.”

In a clear sign that the Virgin America deal is purely promotional, YouTube has no plans to accompany its content with advertising, according to a company spokeswoman. Other financial terms of the deal were not disclosed.