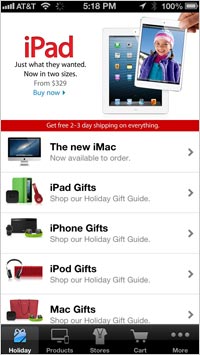 Showing and selling the goods on a four- or five-inch screen has been an ongoing challenge as shoppers move to mobile even more rapidly than retailers can keep up. But a new study of 1,000 smartphone and tablet shoppers by Equation Research on behalf of Mobiquity showed that some brick-and-mortar brands are already getting high marks from consumers.

When asked to rate their mobile shopping experience overall, consumers ranked Apple a clear favorite, with 51% calling the experience very satisfactory and 39% considering it satisfactory. Best Buy and Kohl's also saw 90% of respondents ticking off one of the top two boxes. Target, Walmart and CVS were right behind with 89% satisfaction ratings.

Walmart is the most frequently visited major retail site both on smartphones and tablets, the study found, with a little less than a third of all mobile users visiting its sites or apps. On smartphones, Target (22%), Best Buy (21%), Apple (15%) and The Home Depot (15%) are the next most-visited brands. On tablets the mix of retailers is about the same, but the overall share of tablet users visiting their respective sites is higher: Walmart (32%), Best Buy (29%), Target (28%), Apple (25%), and the Home Depot (20%).

Walmart is again the leader in mobile purchases, with 23% of shoppers on a smartphone and  24% on a tablet saying they have made a mobile purchase from the retailer. The path to purchase, however, is more complex than simply tapping a mobile buy button, and it underscores how mobile shopping does not necessarily translate into mobile buying. Thirty-two percent of mobile shoppers who made a purchase did so in the physical retail store after browsing on their phone, 27% on the smartphone, 20% on a tablet and 19% on the desktop Web site. Tablets proved to be a more direct path, with 33% of T-shoppers completing the purchase on that platform and only 27% going to the store.

Conversely, the study suggests that the “showrooming” phenomenon is quite real, with 41% of shoppers saying they made a purchase on their devices after shopping in the store. Almost a third of those mobile buyers said they did so mainly for a better price.

There is a price to be paid for getting m-shopping experiences wrong, consumers say. Users are noticing. Among those who were dissatisfied with mobile shopping experiences, 50% cited slow load times in their mobile app, 65% at the mobile site, 67% from their tablet app and 45% from their tablet site. About a third of dissatisfied customers cited poor navigation across platforms, although tablets were singled out for that problem by 39%. Also problematic for tablets was a checkout problem, where 57% of unhappy customers located the problem.

Mobiquity has released the full study in the form of an infographic.