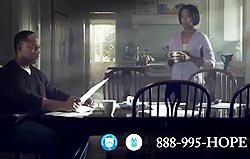 With more than 5% of American homeowners behind on their mortgage payments, the U.S. government is trying to bring them relief with a number of programs to help them avoid foreclosure.

But these programs will not have much effect if eligible homeowners are not aware that they exist.

With that in mind, several departments of the U.S. government have joined forces with the Ad Council in a campaign of public service advertisements to raise awareness of its Foreclosure Prevention Assistance options.

Together with the U.S. Department of the Treasury and the Department of Housing and Urban Development, the Ad Council unveiled the third and final phase of the campaign, promoting the Making Home Affordable Program, which offers free resources and assistance to homeowners at risk of default and foreclosure.

The Making Home Affordable Program was recently extended through December 2013, and the eligibility criteria were also broadened.

2012 has been a busy year for the Ad Council. In August it unveiled a campaign to combat texting while driving, focusing on the dangers of distracted driving; another campaign was created to educate parents about good dental hygiene for children. In November, the council launched a series of PSAs encouraging charitable donations to help relief efforts following Hurricane Sandy, emphasizing that cash donations are more useful than donations of goods.