Sure, You Know Jack! 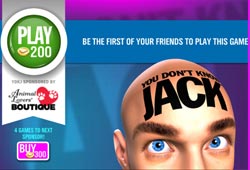 The arrival of You Don’t Know Jack on iOS this week is worth mentioning for a number of reasons, not the least of which is its digital legacy. The smart-mouthed multimedia trivia game was born of the early CD-based PC gaming era. I remember being impressed in 1995 by its sophisticated approach to digital gaming, self-mocking and yet somehow solid as a game as well.

For you youngsters, YDKJ -- which has found its place on most new digital platforms since the CD days -- sounds like a cheesy game show. The too-knowing narrator pulls you through trivia questions with asides, puns, and winks and nods to the rank silliness of it all. The graphics are at once simple and polished. Objects and animated letters fly in and out of the screen, with a range of sound effects and bits of visual comedy.

The brilliant aesthetic of the game is that it feels like a TV game show that never stops moving and keeps the player floating on this rapids of irony, challenge, and eye candy. The iOS version even has mock ads, for a literally squirrely cereal. I am a longtime fan, mainly of the way the game truly immerses the gamer in its tone and spirit by leveraging almost all of the tools of interactive media in very simple ways. It always felt to me like a pure multimedia gaming experience that really couldn't exist anywhere other than the modern PC.

It is anyone's guess why it took so long for such a relentless franchise to come to iOS. In many ways the smartphone may be the device that YDKJ was waiting for all along. The touchscreen allows the user to be fully engaged with some of the timed challenges. Even better, the freemium game's model is nicely tuned to the mobile user. You can buy upgrades (token packs) you exchange for extended plays, or you can just come back once a day for the daily free content.

Nicely played. Unlike most digital trivia games where piles of questions just can be loaded in, the experience relies on considerable voiceover work and animation. This is not a fast-game game, in that you are often watching the hijinks unfold, and each episode must be scripted, acted and rendered. You may get one free trivia episode a day -- but it is a meaningful entertainment, often keyed to current events.

In this version, the mobile version is synchronized with the Facebook edition, so you can play against online gamers or your friends across platforms. Other player portraits are even integrated into the game play.

YDKJ seems like the kind of content environment that is so TV-like in its engagement and multimedia richness that one expects to see a TV spot. In fact, game rewards include the ability to unlock mock ads. Wouldn’t it be nice to have a brand build something so rich and addictive, so right for mobile, that ads almost complete the experience?