3D Printing From Their Perspective

Want to know the potential impact of 3D printing? Ask a teen. For the past year, 3D printing has been in the headlines, and many a marketer has wondered how it will fit into our daily lives. So when I heard about 3DEA, a 3D printing pop-up shop, I had to check it out. Talking with the teens I met at 3DEA, it was easy to see they were excited by the myriad possibilities at their fingertips and not remotely daunted by the foreign technology in front of them.

You might already own a 3D-printed object and not even know it. The decades-old technology is used to make everything from jewelry to car parts in a range of materials, including plastic, metal, and ceramic. Printers can even produce articulated items that come out fully formed and moveable, such as seamless chains. Don’t have a printer at home? You can send the file of the object you’ve designed to a 3D printing company that will then send you the finished piece — it’s Cafe Press on steroids!

The 3DEA shop is designed to inform visitors about the process and uses of 3D printing — objects on display include furniture, vases, gears, apparel, etc. — and also give them a hands-on introduction to 3D printing software and machines. The adults who stop in to 3DEA watch printers churn out items repeatedly saying, “That’s so cool!” but the teen visitors aren’t thrilled by technology for technology’s sake. They’re excited by what it enables them to do, and 3D printing dovetails perfectly with the Millennial spirit of being a “fixer/maker/builder.”

At one bay of computers, Ellery, 16, ignored the busy machines as she sculpted a figure using Sculptris software. She’d never used such a program before visiting the shop, but it came naturally to her and this was her second creation. What does she think of seeing an item that she created become reality through 3D printing? “Oh, I’m a god!” she said without hesitation, knowing that the printers enable her to create anything she can imagine. She wants to have a 3D printer at home — it’s on her holiday wish list. She has thoroughly examined the specs of different brands of 3D printers and tried them out, as any Millennial would buying a new piece of technology, and she has her reasons for preferring an Ultimaker: the printing base is bigger so she can make bigger objects, and the resolution is finer. 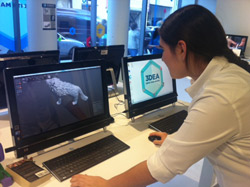 Ellery arrived at 3DEA through her own curiosity, but Katherine Tulley brought her class of 34 teen girls from the Young Women’s Leadership School to get some hands-on experience with the technology they had been exploring at school. She and her students have been focusing intensively on 3D printing in her course, discussing the pros and cons compared to mass production and the benefits and drawbacks for society. As for its impact on their lives, “[the students] like its ability to personalize and the speed, that is for small figures,” says Tulley. What teen could resist a technology that allows them to create exactly what they want and have it immediately?

I asked Ellery what she would make if she received a 3D printer this holiday season. Her eyes widened, but she said she wasn’t sure. After all, the possibilities are endless.

Note: As part of 3DEA, the New York Economic Development Corporation is sponsoring a 3D printing challenge to find New York’s Next Top Makers. Anyone, teens included, can submit designs with commercial potential, and prizes include studio space, printing services, and technological and business mentoring.