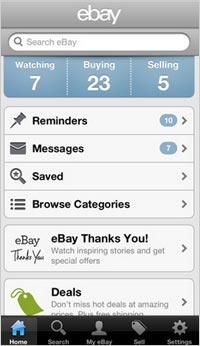 If you can get the commerce dollars to flow, then the ad revenue is a trickle by comparison, eBay appears to be declaring about the mobile ecosystem. In an interview with All Things D's Tricia Duryee, eBay’s President of Global Marketplaces Devin Wenig says the m-commerce giant is pulling the ad model out of its own apps.

According to Wenig, the ads never delivered on their main aim -- to render much revenue -- and they ended up impeding the user experience. He tells Duryee: "It's not worth it."

eBay claims that its mobile presence will deliver close to $10 billion in transactions this year. Obviously, that is not money going into eBay’s pocket necessarily, but they are getting their cut of sales from their merchant/partners. It ain’t chump change. And it makes banner ads look paltry by comparison.

eBay announced late last week that it has seen record mobile shopping this year, peaking on December 9 with a 133% increase over last year. eBay said last week that even if devices are not actually purchased for the sale, it finds that a third of purchases involve mobile as one of its touchpoints in the process.

Turning one's back on mobile advertising as a potential revenue source is a nice racket that is open to companies like eBay that cash in on the actual transaction. Clearly this is not an option for most other app developers and media companies. But Wenig’s sentiment, while a luxury available only to some, is worth noting. The tendency to see standard banner advertising as a detriment to the user experience is an important reminder that mobile cannot rely on the received models of the Web. Marketers have to take seriously exactly how seriously people regard these devices relative to all gadgetry that preceded it.

Truth be told, most mobile ads I encounter on the bottom rail of my phone don’t look like they belong there. The discordance between app and ad is much stronger on these devices mainly because app and even many mobile Web designs are just so much cleaner and more fluid than Web sites. Usability, flow, mood, and touchability all are heightened values of good app design, and the typical networked ad unit is that much more out of step with the rest of the experience.

mobile
1 comment about "eBay Declares It Doesn't Need Ads In Apps".
Check to receive email when comments are posted.
Next story loading