The agency organized a party with a mission: Spotify attracts more users, while introducing the music platform and app developers to big brand thinking. 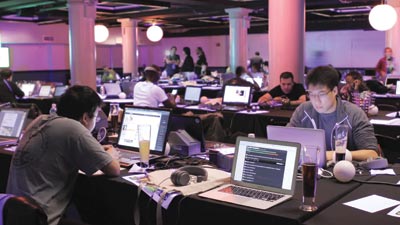 Every digital media platform worthy of the name unleashes the creativity of its audience by opening up the platform to app developers, encouraging them to come up with new apps that make the platform more accessible, more convenient, or simply more fun. It’s a win-win for both sides, as the platform taps the insight and enthusiasm of users to improve its service, and the users get to customize their favorite media.

There’s no question Spotify, launched by a group of enterprising Swedes in 2006, is blowing up: the number of active monthly users increased from 7.4 million in November 2011 to 24 million in November 2012, and the platform boasts high engagement with its comprehensive music offerings. But with paying subscribers making up just 20% of the total user base, and artists demanding more royalties, Spotify faced that all-too-common digital media conundrum: how to make money off of a popular but mostly free online service?

To help the process along (and maybe get a leg up on advertising opportunities associated with apps) OMD organized a “hackathon” for Spotify February 24-26, 2012, bringing together more than 300 programmers and app developers for two straight days of brainstorming and creating music apps for the burgeoning digital music platform. Sponsors including McDonald’s, Doritos, Mountain Dew, State Farm, and CW stumped up cash for a $10,000 grand prize for the best app to emerge from the hackathon. Basically the Spotify hackathon aimed to kill two birds with one stone, helping Spotify attract more users while introducing Spotify and app developers to major brand sponsors.

In keeping with the playful mash-up theme, the hackathon was hosted at the Manhattan branch of SPiN Galactic, a chain of Ping-Pong clubs co-founded by Susan Sarandon. In this nightclub environment, hackers were supplied with pizza and plenty of energy drinks in the form of Mountain Dew. A number of tech resources were also placed at the hackers’ disposal, including Facebook, Last.fm, Foursquare, Twilio, and the Echo Nest. There were two live concerts, and the vibe was cosmopolitan: according to organizers, the Spotify hackathon drew programmers from all over the world, including Australia, Italy, Pakistan and Finland.

At the end of the weekend, contenders were judged by a panel of representatives from the brand sponsors, OMD, and Spotify itself. Out of over 45 contenders, the grand prize went to Swarm, which allows Spotify users to aggregate their friends’ current listening activity to compose their own dynamic playlists, which are updated in real time — effectively turning Spotify into a music-based social network. Probably the best description of Swarm came from its developer, Peter Watts (the Australian who previously created +Music, a Google Chrome plugin for Facebook): “It will take the internet, find everything related to music, shove it inside Spotify, and put a play button on it.” Swarm earned rave reviews, with CNET promising it will “change how you use Spotify.”

As it turns out, the hackathon was part of a bigger app push from Spotify, which shortly afterwards launched a number of branded apps with sponsors like AT&T, McDonald’s, Intel, and Reebok. And thanks to its relationship with OMD, there’s no doubt more to come.