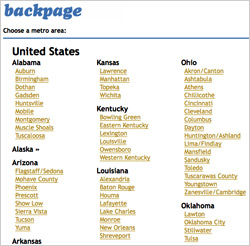 Siding with Backpage.com, a federal judge in Tennessee banned state law enforcement authorities from enforcing a new law aimed at curbing the sex-trafficking of teens.

The law, which was similar to a measure enacted in Washington State, made it a felony to sell ads that appear to offer a "commercial sex act" with a minor. Last year, the classifieds site Backpage.com sued to block the law, arguing that it conflicted with a federal statute about the Internet, and that it was so broad that it could block legitimate speech.

U.S. District Court Senior Judge John Nixon granted Backpage's request on Thursday. "The state may not use a butcher knife on a problem that requires a scalpel to fix. Nor may a state enforce a law that flatly conflicts with federal law," he wrote in a 57-page ruling.

The ruling is in line with a decision last year by U.S. District Court Judge Ricardo Martinez in Seattle, who blocked a comparable Washington state law.

Nixon ruled that the Tennessee measure is trumped by the federal Communications Decency Act, which provides that interactive services providers are not responsible when users create or post illegal content.

The judge also found the law unconstitutional because it applies to ads based on how they "appear," regardless of whether the ads actually feature people who are underage.

"The state law is likely substantially broader than required for its regulatory purpose to protect the health and safety of minors trafficked in Tennessee," he wrote. "The statute would impose liability even if an advertisement did not involve actual minors or sexual acts with minors. ... The law could impose liability for advertisements, notices, announcements and online postings that do not involve minors at all, or that appear suggestive without actually involving a paid-for sexual act."