Real-Time With Tina Chadwick: How Big Data Is Impacting The Big Idea 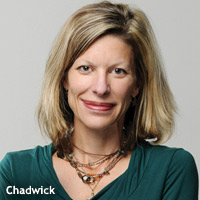 In an accompanying op-ed, Moxie Group Creative Director Tina Chadwick makes the case that real-time data analytics is not the anathema some creatives make it out to be, and that integrating machine learning with human intuition is leading to a new creative process, and some new forms of consumer insights and advertising. In the following interview, Chadwick expounds on that -- straight from her gut.

RTM Daily: How is the creative process -- how you make ads -- changing because of access to real-time data?

Tina Chadwick: I feel like it is much more scientific. But as soon a you say “scientific,” people think, “formulaic” and “templated,” but it is much more about being directed. I think analytics just defines the space in which you play a little more so that you have a fence around your playground. It gives you constraints. I hate to say that, because the word constraints makes it sound limiting, but it’s more about having informed borders that steer you away from things that aren’t working.

RTM: Can you give an example where real-time data helped change the direction of a campaign you worked on?

Chadwick: We were working on one for Mother’s Day, for Verizon, and it’s kind of knee-jerk to go to a “mom needs a break" theme, but the data showed us that mom actually wants a thrill -- something out of the ordinary that’s not relaxing. It’s those kinds of things where the data gives you an insight that keeps you from going in the wrong direction based on stereotypes about people versus what they really want.

RTM: What does that do to the “Big Idea?” Is it more analytical and fewer lightbulb moments? Are modern-day creatives less Don Draper scribbling on the back of a cocktail napkins and more propeller-heads poring over a dashboard or Excel file?

Chadwick: I would say that the cocktail napkin has become a whiteboard, but I’m still writing on cocktail napkins too. You’re still thinking the same way, but you have more defined area that you are thinking in. Instead of mothers who want to relax. It’s mothers who want an adventure. But the napkins still happen. The late nights still happen. There are just more things to validate the process.

RTM: Haven’t creatives always done “real-time” research with real people in the sense that you’re students and observers of human nature? Whether it’s in a focus group or in the real world, don’t creatives always get their best ideas simply from observing other people?

Chadwick: Yes, but now it’s more real-time and there’s no waiting. I’m 45, so I grew up in the times when we didn’t have real-time data. You went to focus groups and learned something that way and developed creative around it. But you had to wait post-campaign to see how it was working. Now you can do learn that mid-campaign and adjust from that. Or you can do A/B tests and change direction on-the-fly. It’s the same thing we were always doing, but the time frame has become more compressed and more responsive.

RTM: Moxie is a digitally focused agency, so does that temper the way you view the role of real-time analytics in the creative process? Or does what you’re espousing apply equally to the JWT's and Goodby's, or dare I say, Saatchi’s of the world, as it would to Moxie?

Chadwick: I think it does. Or it will shortly, because the analytics in digital is super easy. It’s just baked into the code and sent back in real-time. Whereas retrofitting older media needs to be thought out more. Even TV is getting easier, but it still has to be retrofitted. In digital, it’s part of the DNA of the medium itself. It’s baked into what we do. But the more [Moxie] gets involved in TV and other media, we have to rethink how to apply it.

But almost everything is digital, or connected to a digital element. Almost every ad, whether it’s on TV or not, has a Web site or a hashtag on it. And we know that during a commercial break, people are going online or tweeting about it. Even commercials have hashtags on them now. And commercials are becoming desired content that people actually tweet. Things like that are changing the way we concept. You think about it less as a commercial, and more as a way to engage someone with a product.

RTM: Are we moving more toward “wisdom of the crowd” logic and less about the kind of up-close and personal human perspective -- focus groups, observational research and insights -- that used to inform the creative process in the past? And if so, what is being lost and what is being gained? How are the ads you’re making different because of that?

Chadwick: Well, I think there can be an over-reliance on data and not enough going with your gut. You need to have both. I think you can create a gut-based hypothesis that cannot be validated by the data, but is still good enough to go with. My fear is that we will develop data streams that we begin to rely on and stop using our gut beyond that. I think we have to be careful to avoid becoming over-reliant on data, and not thinking for ourselves without the data.

4 comments about "Real-Time With Tina Chadwick: How Big Data Is Impacting The Big Idea".
Check to receive email when comments are posted.
Read more comments >
Next story loading