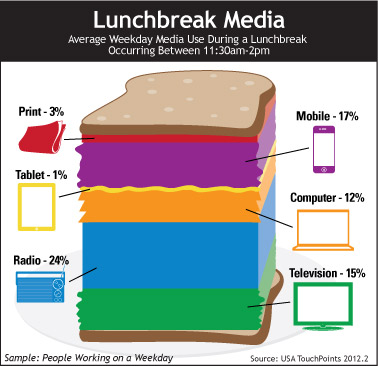 Twenty years ago, it’s a pretty safe bet that the media profile of the average working person’s weekday lunch break will have been dominated by radio, print and TV, with the computer being the new kid on the block.

This USA TouchPoints analysis of which media people use during a break from work occurring anywhere between 11:30 a.m.-2:00 p.m. on the average weekday reveals how that isn’t the case today.

While radio is clearly dominant a the medium of choice for 24% of people on a work day, the ascendancy of mobile places it in second place with a reach of 17% -- just ahead of television at 15% and the computer at 12%.

It’s safe to assume that the combination of radio in the workplace, the car and at retail outlets and elsewhere combine to support radio's position.

As far as mobile is concerned, it will be interesting to see if usage grows over time during the lunch break or whether this time is used to cram in the business of lunch or personal errands.

The relative strength of the TV at this time may be related to those eating (and perhaps working) at home, but it may in part be influenced by the increase in the prevalence of TVs in public spaces, such as sports bars.

The computer is almost certainly achieving it’s 12% through a combination of laptop use outside the office and -- perhaps more likely -- non-work related use in the office itself.

Print achieves a reach of only 3% -- presumably having lost share over the years to the computer and perhaps mobile. At present, it is ahead of the tablet, which only currently registers 1% reach during the lunch break.  Perhaps touchscreens and food really don’t mix.