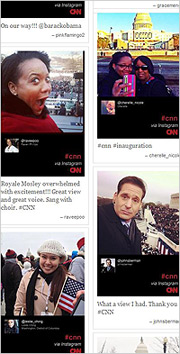 This week’s Presidential Inaugural may serve as an interesting milestone in the emerging power of mobilized multimedia as crowdsourced journalism. Instagram encouraged its users at the Monday events to post their pics to a series of hashtags that included #inauguration2013, #inaug2013 and in concert with the cable news network #CNN.

In my memory this was among the highest-profile instances of a major world event being reported by design by hundreds of thousands of attendees. The torrent of images coursing through Instagram and the various hashtags throughout the day attest to the rapid rise of Instagram into our consciousness and certainly its potential as a media platform.

In general, the flow of images was as tedious and boring as a common Twitter feed. To be cynical for a second, looking at the raw feed of personal images into a hashtag like these is a bit like being trapped in the world's longest, most boring slide show ever devised. Back in the day of the Kodak Carousel, showing Kodachrome slides of the family vacation in a darkened living room was the nightmarish end of many a suburban dinner party. How many wives had to nudge their husbands awake so as not to be rude?

While many media watchers will wring their hands over the notion that crowdsourced journalism further undermines mainstream media models, the practice also calls into high relief the value of the editorial hand. CNN did it up right on its page aggregating the feed. The site ran the feed of user-generated content, but called out Editor’s Picks that captured a blend of photojournalistic quality, historic poignancy, news interest and personal excitement.

Events like these and experiments in leveraging UGC point to an emerging art of news curation and aggregation. Traditional journos may turn their noses up at the idea, but I suspect we will see news outlets assert different tones, styles, and perspectives in the way they curate the mobilized reporter pool.

And of course this crowdsourcing of event imagery becomes a platform for the raw, raucous, oh so democratic process. Partisans and wags were out in full force in this feed of Inaugural images. Online and mobile images joined with superimposed headlines have become the new graffiti of digital democracy. Politicians and media figures were lauded, lampooned and slandered in the feed. One image that captured former President Bill Clinton mugging a bit in the background of a photo of Kelly Clarkson on the podium went viral quickly with a host of different lewd headlines.

Which is to say that crowdsourcing event coverage and its potential to deflate power and privilege is more fundamentally American and democratic than the pomp, ceremony and wealth on show at the event itself.