Fumbling For The Remote 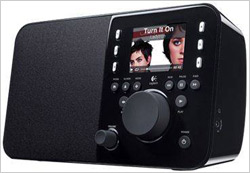 "Fix Pandora for me," my wife asks on a regular basis.

In fact, Pandora is not broken. What is broken is her ability to hear her stations via the Logitech Sqeezebox, the portable connected radio unit. We have enjoyed a couple iterations of the Logitech model now, as it gives my wife her Pandora stations anywhere in the house. The new and excellent version of the device has a rechargeable on-board battery so we can unplug and carry it into any room for hours at a time.

The problem is that controlling it most efficiently requires an app, which my wife is averse to using. Which leads us to me having to "fix Pandora" on a regular basis. Logitech’s is one of a handful of gadgets that are using mobile phone apps as primary sources of control.

Because progress is so haphazard and device-specific, the model for using your mobile phone as a remote control on a range of media devices is not discussed much. Its potential is enormous, however. For instance, by pushing control to its app, Logitech regularly exposes me to a range of content options that I would not be considering otherwise. The possibilities for promotion and discovery in the phone-as-remote model are astounding.

Even a poor remote interface on an app is generations ahead of the traditional remote. My Xfinity app could use a lot of work in terms of personalization, ease of use, filtering the hundreds of channels, and pushing new content to me. It isn’t even close to what is possible. But it has become a reflex for me in the living room. I already know that I will get a clearer, quicker view of what is available at any given hour on the grid from the iOS app for my cable box than I will by hitting the damnable on-screen guide button.

This remote control model gets especially interesting as it begins to integrate with third-party apps. The Zeebox second-screen TV app now lets me log into my Xfinity account and control the channels from its interface. One had to wonder what manner of ad and content partnerships and cross-promotions the two companies are hatching for this kind of cross-app functionality.

But when it comes to using smartphones as remote controls, there is a habit hurdle, to be sure. There is a kind of virtual fumbling that goes on with my iOS devices when I remember a given device has app control. As the icon screens get cluttered, recalling the app name and finding it on deck approaches the frustration and tedium of finding the physical remote in the crevice of the couch.

And getting your spouse to embrace the supposed efficiencies of app-controlled hardware is another leap altogether.

"You know there is an app for the radio?" I say to my wife, understanding the sheer stupidity of the remark as the words flow from my lips.

"I need an app to turn on the radio?"

"Well, you can use an app to turn on and control the radio more easily," I offer as a better construction.

"I need an app to use the radio?" she says, with new emphases to dramatize absurdity. I recognize that the transition may take a while.

"Okay, I will fix Pandora."